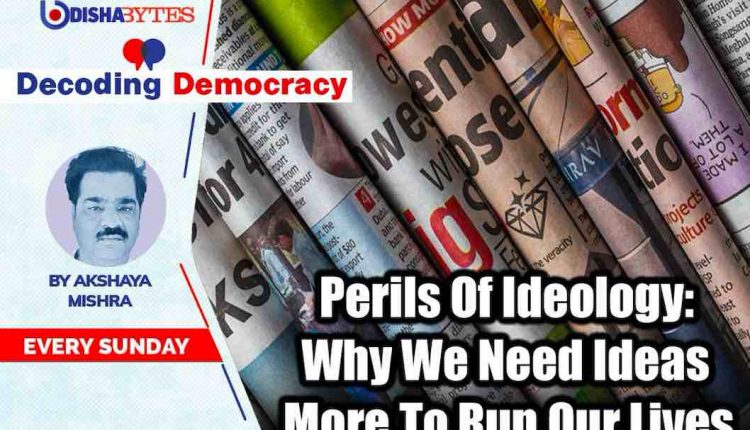 Ideology is a destructive force. Once turned into an instrument of power-grab, and weaponised for political purposes, it loses its softer edges, and to a great degree its moral moorings too.

It becomes a marker of identity, creating the ‘us’ vs ‘them’ separation to identify followers and foes. At some point, it becomes a tool of domination, coercion and killing. Ideology has caused more human misery than any other thing man-made, barring religion. History bears ample evidence for it.

Do we need ideology at all? The topic calls for an informed debate, particularly in times like now when the country’s intellectual space is in a churn after the forceful ascendance of the ideological Right and the shrinking of the ideological Left. In fact, zoomed wider, it’s a global trend. The Right and the Far Right, relegated to the margins of the political ecosystem since long, have started wresting back their space in Europe and elsewhere. They hurl discomforting questions for which the Left’s thought system has no convincing answers. It should be cause for no concern at all, but for the hurry, it takes the shape of conflicts and the way it vitiates public discourse through the normalisation of hate and misinformation.

The ordinary Indian or individual anywhere is ideology-agnostic. He or she may have strong beliefs on certain matters, but that doesn’t make the person subscriber or follower of any singular ideology. The person may be conservative or liberal, superstitious or rational, accommodating or obstinate and religious or irreligious at the same time depending on circumstances and individual preference. A person can be a devout Hindu yet deeply resentful of rituals he is made to perform at temples; in the village, he would be mindful of caste distances yet in the college or in a distant town he would be oblivious to it; and he might have deep bonding with Muslim families in the neighbourhood and have no objection to them participating in Durga Puja, yet he would be reluctant to get into a mosque. Simply put, ordinary citizens live in a world of their own. They are unaware that they fit into a framework of beliefs and ideas that constitute ideology; they are neither Left nor Right nor anything else.

Ideology as we know is primarily a political construct. It sorts humans into categories on the basis of their beliefs and likemindedness and seeks to make them part of a wider thought ecosystem. The Right, for example, would put liberals, seculars, socialists and rationalists besides the political Left in one basket and identify them as the common enemy of those believing in social and religious traditions, identities, the greatness of the past, and the preservation of the status quo in general. Of course, such categorisation is largely vague, designed solely to capture the imagination of people and make them part of a herd.

Democracies offer space for competing ideologies to co-exist. But ultimately it’s political power that provides relevance to an ideology. Any changes in alignment with ideology can only work with the advantages power provides. That explains the aggression and combativeness on both sides to capture it and also maintain and expand the herd. The fallout is bitter and the victim is usually the ordinary man. The Left possibly killed more people across the world in its endeavour to win and retain power than any other ideology. It won’t surprise if the Right heads that way too.

Ideologies originate in a specific social, economic and cultural context. They are relevant to contemporaneous realities. When the context changes, either with time or in tune with new developments, their foundational logic becomes untenable. Such a situation should spur a rethink and revision of the basic tenets. It usually doesn’t. The Left is a case in point. It is no surprise that it is confined to a few academic institutions these days, with all links to people snapped. The Right, its counterweight, is primarily reactionary, to some degree lacks in intellectual mojo to create something original. The current world is trapped in the tug-of-war between ideologies without vision.

That being the reality, do we need ideology at all? No. Perhaps we need ideas. Ideas are solution-centric, pragmatic and have flexibility while the latter is self-limiting due to its dogmatic approach to issues. In societies with growing diversity and complexities, such an approach is bound to be found inadequate. There is simply no way the dynamic everyday behaviour of people can be forced into a straitjacket. Handling their issues call for flexibility in the thought process.

How do we shift our polity from ideology to ideas? Or make it ideology-neutral? That is some food for thought.

[Watch] ‘Down With Xi’: Protests In China Against COVID Curbs & Fire That Killed 10