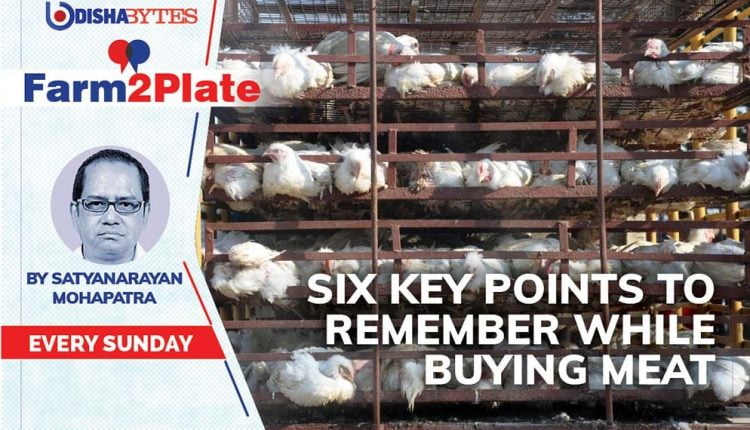 It’s Sunday and we look forward to a good lunch and dinner that includes a meat portion (due apology to the vegetarians and vegans). The meat component may be poultry or goat or fish. Let’s talk about poultry meat today.

Prologue: In a very high jump in the Food Safety Index released by the Food Safety and Standards Authority of India (FSSAI) in September, Odisha moved to the fourth position at the all-India level from the 13th rank recorded in the past two years. The Food Commissionerate and the Food Safety officers should get a pat on their back for this achievement. But the ground reality presents a grim picture.

It is important that the consumers should be aware of the quality of meat s/he consuming, the slaughtering process, and hygiene and storage conditions. Though an effort was made for photo documentation of the process, the officials were shooed away in all the wet markets of Bhubaneswar.

Next time you are in a wet market for poultry meat do check if the chickens are normal or healthy. Choose a live bird and check on the following symptoms and signs for a healthy chicken before it is slaughtered.

Check the eyes: The eyes should be clear and shiny. When the chicken is alert and active, its eyelids do not show. There should be no swelling or discharge from the eyes.

Check the nose and breathing pattern:  Both nostrils should be clear and open, with no discharge from the nostrils. A healthy chicken will breathe silently with the beak closed (in hot weather, birds may breathe with their mouth open). A diseased chicken will be coughing, rattling, and obvious panting movements are observed even after being cooled. The butchers camouflage it by throwing water on the birds in the coop (wired mesh) – the birds are shocked and hurdle with closed mouths. The head should have a clean comb and wattles, bright eyes and clean nostrils without being caked.

The wings, stance and feathers: Most chicken breeds should carry their wings close to the body. The wings shouldn’t droop or look twisted. The droopy wings are a sign of illness, which may be genetic, and it is more dangerous for human consumption. The stance should be erect and tail held high, avoid birds if the head is drooping, if it is placed back over the body or between the legs. Sometimes birds lose feathers; particularly tail feathers when they’re captured. If the bird appears healthy otherwise and the skin appears smooth and intact, it’s probably fine. On the whole, the feathers should be smooth and neat and not fluffed out. It should not have any stain on the abdomen portion.

Feet and toes: The three front toes of chickens should point straight ahead, and the feet should not turn outward. The toes shouldn’t point in toward each other. There should be no swelling on the legs or toes. If the bottoms of the foot have swelling and raw open wounds, it means the bird has not been kept in hygienic conditions. Most importantly, the legs should be cool to touch and not warm.

Muscles build-up: A healthy chicken is rarely still. When held, it struggles vigorously, is very flighty and feels solid. The bird should not have uneven thigh muscle and the keel bone should not be protruding out. The abdomen should be firm and not very hard or very soft. When they are in the coop, the birds will have an eating and drinking pattern and should not be drinking only.

Vent and droppings: The feathers under the tail of the chicken, especially around the vent, should not be matted with faeces, and not have any sores or wounds around it or protrusion of tissues. It should be clean and on a level with the body surface. Observing the droppings is important – normally it should be grey, brown with white caps, and definite form. A diseased bird will have white, green, red yellow and very watery or sticky faeces

Do not buy a chicken which is lame as it is a sign of overfeeding hormones and unnatural food to make their bodies grow very fat in a very short time. The legs are unable to take this weight and they have great difficulty while walking. When the chickens have trouble standing or walking it spends a lot of time resting with their weight against their breastbone, or keel. The pressure of the breastbone against the ground causes irritation and inflammation, resulting in blisters, also known as keel cyst, keel bursitis. Housing chicken in a wire mesh cage or in a wet hard-packed cage after they are out from the breeding farm increases the chance of breast blisters and infections from other diseased birds. There is poor feather development, which results in fewer feathers to protect the bird. This infection causes health complications and may be fatal once consumed.

Hope the regulatory authorities take note of this and take stringent action on those who deviate from the SOPs as defined in Schedule IV of FSSAI – on FSMS. For the consumers please be upfront with the butchers and share your bitter experience, if any, on different platforms.