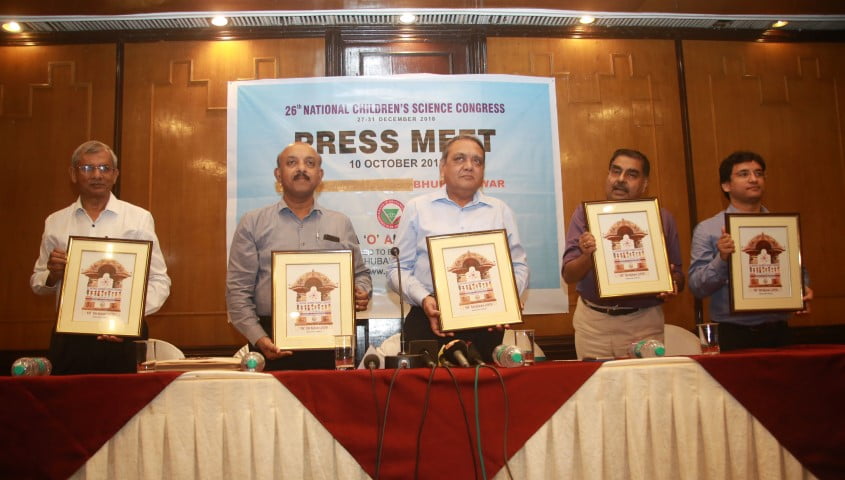 Bhubaneswar: The National Children’s Science Congress (NCSC), organised every year with the objective of providing a forum to children to give vent to their creativity and ability to innovate, will be held at the SOA (Deemed to be University) here from December 27 to 31.

Around 800 children in the age group of 10 to 17 years, both from the formal school system and those who are out of school or differently abled, will be attending the event catalysed and supported by the National Council for Science and Technology Communication (NCSTC), informed SOA Vice-Chancellor, Professor Amit Banerjee on Wednesday.

The NCSTC is mandated to communicate science and technology to the masses, stimulate a scientific and technological temper and coordinate such efforts across the country. This will be the 26th edition of the NCSC.

Children from the ASEAN and Gulf countries are also likely to attend this programme made possible by the Department of Science and Technology, Government of India, Professor Banerjee added.

The newly designed logo for the NCSC and the website were also unveiled at the press conference. The focal theme for this year’s NCSC is, “Science, Technology and Innovation for a Clean, Green and Healthy Nation.”

Launched in 1993, this is the second time that the NCSC is being held in Odisha. Besides the participating children, around 400 teachers, guides, facilitators and parents will also be attending the event along with scores of scientists, evaluators and researchers, Professor Banerjee said.

The inauguration will be held in SOA’s 1400-seat state-of-the-art auditorium in Campus-II. The technical sessions, besides exhibitions and discussions will be held in the adjacent facilities in the campus.

Children will present their research findings relating to the focal theme and identified sub-themes, during the technical sessions. “The whole idea is to prompt the children to think about societal problems, ponder over its causes and subsequently try and solve the same. It is aimed at encouraging a sense of discovery among the children,” the VC said.

The event will also create a kaleidoscope of culture as children from different states and countries will perform in the cultural festival, creating a unique techno-cultural ethos.

It is a proud moment for SOA, a Deemed to be University, which has been actively promoting excellence in academics and research, as it hosts such an event of national importance, Professor Banerjee said.

SOA has been continuously ranked among the top 25 institutions of higher education in the university category in the country by the National Institutional Ranking Framework (NIRF), Ministry of Human Resources Development, occupying the 24th rank in the NIRF placings of 2018, he added.