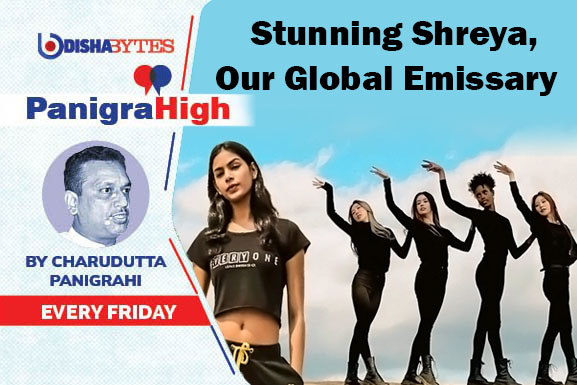 Shreya Lenka (camera name Sriya) and Great Thunberg are almost the same age. One rattles humanity’s responsibility for existence and the other poised to drown the world in the Korean pop deluge.

K pop is hardly a genre anymore. It’s a way of life for the youngsters since 2013-15, even if it first burst into the global scene sometime in the 90’s. No wonder, her friends in outlying Jharsuguda town in Odisha ushered her into K Pop.

The reach of Korean Pop music is unbelievably deep, last mile and lingering. Music with deep impact videos seizes all, the eyes, ears and the brain. The music videos are sleek and expressive. They tell stories with tremendous use of effects, make up, outfits, and almost always backed a greater theme and vision. It shows. Initially I found them a little over the top but they certainly meet the dreams of a demography, primarily GenZ and millennials, which is the majority and the future.

Smaller places, remote locations, diverse sets of younger people are writing world future and culture. Future is being crafted with autonomy. Hegemony of the perceived centres of culture or innovations are buried.

Jharsuguda girl Shreya is now a chosen constituent of a $10-11 Bn wave which continues unebbing. Her band Black Swan is successful and other prominent groups have had records of attracting more than 101.1 billion views within 24 hours of their song releases. “Dynamite”, the 2020 hit of BTS was magical. I started following K Pop from Gangam onwards. One fine morning, it was Gangam at every nook and corner.

Music, videos and music videos are no more some NYC or California or London or Paris made. Black Swan is a goodwill ambassador of a county named Pyeongchang. The band has also started a Korean Travel Series in collaboration with the Korean Cultural Center of Belgium.

According to a survey last year on the popularity of K-pop worldwide, people felt that K-pop was widely known and popular among the general public rather than being confined to fan circles only.

K-pop is not only the music. It is an addictive mix of smart choreography and whacky music videos but all along catapulting the Korean cultural wave, called famously Hallyu, to the world stage. Shreya would be privy to a small nation’s (much smaller than Odisha) drive to build a cultural economy around K Pop, OTT movies, drama, cuisine.

Admittedly, Shreya’s Odissi learning has been her mainstay in her rise to fame and international celebrity status. Ideally, she could share her experience due to her international exposure in fast-moving cultural phenomena and help her home state Odisha shape a futuristic ‘cultural soft power’ for itself. Odisha’s time for Woke Culturalism is now. Odisha’s export won’t be limited to extractions from earth, but can shift to supplements to earth, majorly.

Her parents deserve special accolades for their unflinching support to the audacious, almost unattainable, global dream of a remotely placed girl from a regular background for whom an engineering degree or a steel plant job in Rourkela could have been the denouement.

This is the transformation in our lives in real terms. Internet has opened doors forever and has given wings to everyone. Non-traditional ascents like that of Shreya have challenged years of hierarchy. Today’s younger than young stars can influence the economic, communication and cultural pillars of an entire country with the help of the internet. During the depressing times of the pandemic, she used the internet to train in dance, learn Korean, audition for K-pop companies vocal lessons, and was preparing for the mega show. Studios were shut but she launched her You Tube channel, DIY (do-it-yourself/she did her practice, shot videos).

I am a fan of Shreya and her parents. No, I guess in the reverse order. But with a lot of hope that soon Shreyas will assist in firming up Odisha’s cultural economy. She can handhold us through current times and future trends.

She is young, successful and can grow to be even more influential. Can we count on her as our champion & emissary?