The Dance of Democracy: Flawed Yet Necessary 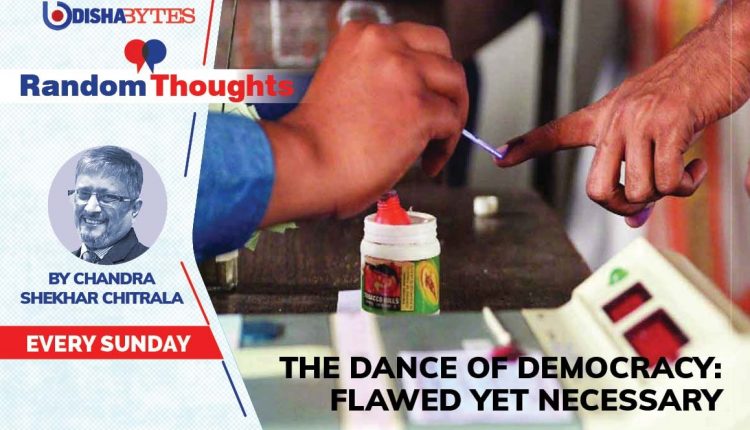 The last couple of months has seen me participating in three separate elections – one as a contestant, one as a returning officer and the latest one as a voter.

All three were unique in their own way. The one I contested saw very enthusiastic participation from across the country with multiple contestants for each post and a very spirited campaign, as well as heated discussions on the electoral roll, the process used for voting, as well as on the excessive campaigning by some candidates.

By contrast, the elections that I conducted as returning officer across six cities saw no contestants from two of them while in the other cities, there were single candidates for the posts, resulting in all the candidates being elected unopposed.

The third election, where I was a mere voter, took me back to my college days as enthusiastic candidates used all means possible, including personal calls, automated calls, SMSs, WhatsApp messages and finally, at the election venue, pushing cards to convince voters to vote for them.

That of course is the ideal that we should aim for. Practically though, we face something that at times is completely different.

Let us start with the motivation that drives people to contest in elections. While public service is the obvious motive proffered by all, everybody knows it is not necessarily so. The most obvious motivators are Power, Prestige and Pelf. When the outcome of an election can provide one or more of these, there will be a multitude of contestants. When these are not necessarily there, we see a surfeit of candidates.

The second aspect is ability. Here too, while every candidate will profess to be the best and deride the competition, in politics, very often candidates are chosen not by their abilities but on a variety of other factors, ranging from their proximity to the decision-makers to their pliability to orders from the High Command, their religion, caste, sub-caste, gender etc. The ability of the candidate to meet the expectations and requirements of the post they are contesting for is very often relegated to the bottom of the list.

This brings us to the fact that electoral politics is not just a calling but also an occupation like every other that needs to provide for the costs necessary for living a comfortable life – not just for the candidates themselves but also for the army of workers and volunteers needed to conduct a campaign. And this campaign begins not with the election but much before, in trying to get the party ticket.

This is where Pelf comes in. It would be foolish for us to expect that the entire machinery functions with an altruistic motive and will work without any expectations of monetary recompense. When we do not have any established means for providing for the expenses incurred in electioneering, it is only natural that funds will be raised through means that would not qualify as being above board. And this is the bane of electoral politics, as morals and ethics are given the short shrift in the effort to extract the maximum benefits possible, to recover the funds expended in getting elected and build a corpus for the next election, while at the same time increasing personal wealth.

However, compared to all the other forms of government, this is the only one, warts and all, that holds out hope for inclusive growth by empowering, at least in theory, even the poorest citizen to be a part in selecting leaders for the country. Which is why we need to be willing to do everything possible on our part to ensure it is not replaced by any other form of government.

And to those who may be curious, I was blessed to receive the support of nearly 60 per cent of the voters to become the Vice President of the XIMB Alumni Association.

Flyers From India Can Board Direct Flights To Canada From Tomorrow; Check Travel Guidelines