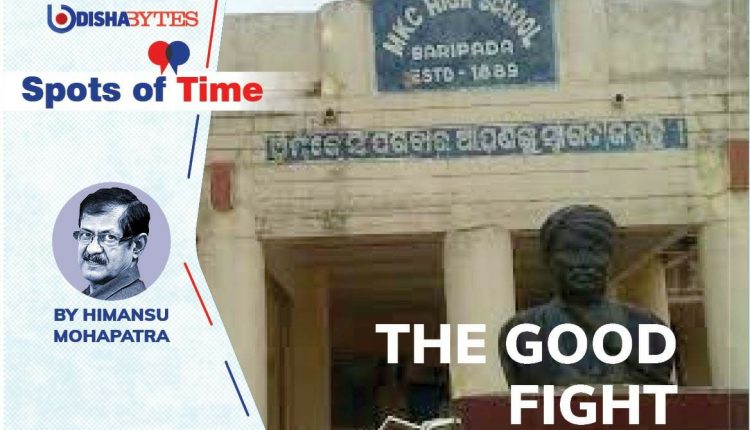 Ever since the two baddies walked into our after-school hours-life a year or so ago, each humdrum school day was transformed. Late afternoons in the school playground were splashed with colour.  Studies paled away further before their swashbuckling stories from real life. Each of them had swagger and style. Each one would recount their escapades before and after the football session in the smaller field attached to the ‘Pakistan Block’ – local lore called it thus – that housed classes 6 and 7 of M.K.C. High School. Soon, however, the law of like poles prevailed: mutual repulsion. A fight between them for who would dominate our after-school hours was imminent. We expected it every day. But something happened at the last minute and the tension was diffused. Next day we waited, even prayed, for the showdown that would decide the undisputed king of the street and the field: Jaga or Siba.

If I was more invested in the event than most of my class 7 friends, it was because of a personal angle thrown in. Matter of fact, I idolised them both. In the last few days, however, Jaga had managed to enlist me on his side by telling on Siba and showing him in a bad light. Siba, he said, had been openly gloating about the prospect of flouting the authority of Naba Mausa, my maternal aunt’s husband, who was reputed to be the nemesis of the street children and young delinquents. Jaga had, in fact, been at the receiving end of Mausa’s ire only a few days ago in the form of a tight slap from him for having dared to answer back to him.

“Do you know what Siba said he would have done if he were in my place?”

“I would have faced him with a cigarette dangling from my mouth, taken a couple of heavy drags at it, thrown it on the ground and stubbed it out under foot. Well, here I’m. Show me what you can do.”

This really hit where it hurt the most. After all he was my uncle. It was very bad of Siba to have said such demeaning things. I badly wanted the fight which Jaga openly declared he would win.

And then it happened suddenly without any warning.

That was a Sunday. All of us assembled in the school field earlier than usual. Siba was there too. He loved to play football. Jaga didn’t play, although he hung around the perimeter of the field, sitting on the grass and eating peanuts or making a quick getaway to the nearby Roxy Cinema and returning with fried potato fritters that he would share with some of us. He always had coins in his pocket. That day was a little different.

There was a side to Jaga that some older boys talked about in whispers. It was this: Jaga would once in a while call one of the younger boys to the boundary line, offer him snacks and say something in his ears. After some time both of them would be seen disappearing behind the block that housed the classrooms. They would emerge after half an hour or so, Jaga seemingly in high spirits, and the boy looking a little crestfallen. The boy would head home quickly. When this happened, the older boys would exchange knowing smiles and looks. I didn’t know what was going on.

The football game got off to a great start that day with our side scoring a goal within the first 5 minutes. There was another chance of a goal a few minutes later. Half our players were gathered near the opponent goal post. In the resulting melee and confusion we couldn’t hear our goalkeeper kicking and screaming as he was being forcibly dragged by Jaga towards the back of the building. My cousin was the first to hear Bula’s cries and see what was happening. He was one of the older boys who understood. In desperation he called out for Siba who was in the throes of the game.

“Bei Jaga. Leave Bula now, this minute, I say or face the worst,” hollered Siba as he made a dash towards Jaga. Seeing him coming, Jaga unhanded Bula and turned to face Siba.

It was as if the world was poised on the edge of a precipice. This was the moment.

They went at each other like two charging bulls. For a few minutes they were inseparable as they clung to each other tightly, each looking for a chance to bring the other down. Suddenly Siba wrenched his right hand free and fetched Jaga a stinging blow on the face. The punch landed on Jaga’s protruding left cheek bone. It was as though a cracker burst. Jaga disengaged from Siba instantly. In the twinkling of an eye he barrelled out of the field like a shot from a gun.

No one knew where he was going. We followed his flight path with unblinking eyes. Jaga stopped under a giant peepal tree that stood at some distance from the playground. Then stones and chunks of rock and gravel came whizzing like missiles towards Siba. Siba dodged them expertly. Jaga made his way back to the field, holding a large rock, and stood facing Siba, uttering vituperation. Siba was unarmed, but undaunted. Jaga cried himself hoarse, swore revenge and left to the accompaniment of a chorus of derisive laughter from the boys. The fight had been decided.

That evening we headed home with a new knowledge. Jaga sank lower in our estimation for his depravity. Siba, however, was raised several notches higher for having fought the good fight.

All that was left for me to do was wish that the faceoff between Siba and Mausa got deferred indefinitely!