Was Fani A Result Of The Lord’s Wrath? 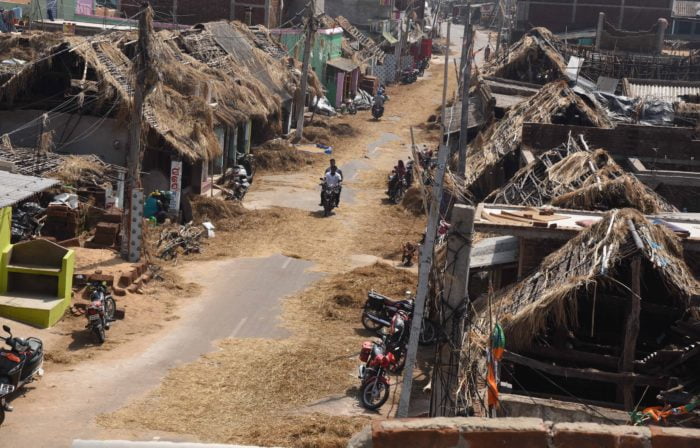 Fani, the powerful cyclone hit Odisha and left a trail of destruction, that ravaged lives, destroyed families and livelihoods.

Odisha has experienced the landfall of at least four major cyclones in the last two decades. The Super cyclone of 1999, Phailin of 2013, Hud Hud of 2014, Titli of 2018, the blizzard of disasters, have spelt unimaginable disaster for the state and the country. But the strength to face the onslaught and recover in life, time and again has its roots in the complete faith in Lord Jagannath (Lord of the Cosmos). The literal translation of the word Jagannath means ‘Lord of the Universe’, as it consists of the sub-words ‘Jagat’ and ‘Nath’. The word ‘Nath’ denotes ‘Lord’ while the word ‘Jagat’ or ‘Jagan’ means ‘universe’.

The Lord has been described in a thousand names, Jagannath Sahasranama (in a dialogue between Yudhishtra and Bheeshma), which has mention in the Brahma Purana (one of the eighteen major Puranas believed to be written by Veda Vyas and is considered the first Maha-Purana, called the Adi Purana).

The deep entrenched belief in Odisha is that He is the patriarch of every Odia household and is the sole protector of every life.

The Purusha Sukta of the Rig Veda (10.7.90.1-16) spells out the supremacy of the Sspreme, which is the only absolute, transcending the transcendental.

The Purusha (the supreme being) has a thousand heads, a thousand eyes and a thousand feet. He has enveloped this world from all sides and has transcended it.

Thus, He only exists forever, the Purushottam.

Fani made landfall in Puri. The mere mortals that we are, we can’t readily accept that the Lord’s abode can be hit by a cyclone, which has also hit us. He has to be invincible, above disasters and destruction. The previous calamities like the super cyclone or the Hud Hud had not ‘reached’ the temple, like it Fani, that damaged parts of the temple.

This direct storming inside the precincts of the temple has shaken the psyche of every Odia, expressed or not. As if the absolute faith in the supreme has been assaulted. This has morally weakened every Odia more than the material loss. In spite of poverty, natural calamities, socio-economic disadvantages, Odisha has been described as the land of civility and rare comity. The civility has been a subtle manifestation of strength, which comes from an absolute faith in Lord Jagannath.

Has this been dented? If yes, then what could be more devastating than a fractured faith and the seeding of doubt?

I have spoken to people in the villages and urban areas and the helplessness is palpable. They don’t know where to appeal. The supreme pulpit for them has been vandalised. Their faith shaken. This weakening of faith is much more damaging than material loss. Because material poverty of people was always antidoted by the anchor of trust in the supreme.

Is this faith a subtle form of abdication from one’s responsibilities? On the one hand, we are wedded to our faith and on the other, we ravage the ecology unregretfully and invite climate change. Do we, the people, not falter in our responsibilities, which if discharged prudently, would help the supreme keep his kingdom beautiful, protected and preserved? Are we not deliberately falling prey to our chicanery for short term gains and go against the law of nature?

If we expect Lord Jagannath to protect us and Himself, then it should be obvious for the Lord to expect discipline and morality in the people in turn. But people are watching the atrocious behaviour of the priests meted out to the pilgrims. Many irregularities or at least the publicity of the alleged wrongdoings have created irreparable cracks in the unflinching faith in the Lord.

Many I spoke to are also of the thought that the Lord, irate with the Kali Yug and the corrupt ways of the people and their world, wants to teach them a lesson and make them go through hardships to realise the pristine greatness of the universe.

This sounds apocryphal but somewhere simple and easy to accept. As a story or a theory, it sounds reasonable. It is the Lord’s creation and we have no right to tamper with it. We have scant respect for nature and ecology and hence have brought misery upon ourselves. Why is divinity eroding? Rituals are increasing but divinity is depleting. When a catastrophe knocks at the door, we tend to lose faith and blame the misery on the Lord or His ‘apathy’.

I do not pray for a kingdom, nor for gold, rubies, and wealth. I do not ask for an excellent and beautiful wife as desired by all men. I simply pray that Jagannatha Swami, whose glories are always sung by Lord Siva, be the constant object of my vision.

The Supreme Lord (Purushottama Jagannath) and the Virat Purusha are the one and the same. Virat Purusha, as explained by Badrayana in Brahma Sutras is the Brahman or the Avângmanasogocharam, meaning that, which is incapable of being grasped by word and mind. Purushottam lies beyond the region of space, time and causation and is inconceivable by the human mind. He transcends the vyakta and the avyakta, as the experience of Markandeya Rishi (sage) is explained in Bhagavata Purana (12.9.15-34).

The sage was swamped by a great deluge and was rescued after he saw Krishna as a glowing baby on a banyan tree. This banyan tree which symbolises the beginning of the universe after the great deluge (read calamity) lies inside Puri Jagannath temple and has been damaged by Fani. From the deluge to Fani, is this a complete cycle? Or are we reading too much into this because we are scared and want to clutch the last straw. The banyan tree, which is Kalpa bata, the wish fulfilling tree, is situated at the centre (Navisthala or the navel) of Sankhakhetra, Puri (conch shaped region called Puri). It is said that Jagannath Das, the author of Odia Bhagabata regarded it as the most Sacred place inside the temple premises. It is believed that Sri Chaitanya and Jagannath Das had met near Bata Ganesh and Sri Chaitanya was so impacted by the ‘Bhagabata’ that he embraced Jagannath Das and started addressing him by the title ‘Atibadi’. The Buddhists who considered Lord Jagannath as an incarnation of Buddha compared ‘Kalpabata’ with Mahaboddhidruma. The tree is the embodiment of nature, the abode of the Supreme, the Genesis.

As Fani gathered storm, the first casualty was the fluttering flag, Neelachakra Bana at the mast of the temple. It was blown away, as reported by some people who saw this to their horror and that spelt ‘doom’ for the believers. It was the beginning of the devastation and people panicked. Such is the ‘attachment’ to the Lord that the flag symbolises the ‘holding of the fort’ and the sovereignty of the Lord and His embrace. Without the flag, people felt the loss of the Lord’s endowment. Did He choose to abandon His mortals?

The Utkala khanda of Skanda purana mentions that the Lord of the Universe, Jagannath, is the origin and the assimilation of all the 10 avataras.

“One darshan of Sri Purushottama (Lord Jagannath) is like the contemplation all the ten avataras”.

Was Fani, playing destruction in the middle of Sankha kshetra or the conch region, a reminder to the mortals about the importance of balance in life? To drive reason to our minds that moderation is the answer to the wild, boundless and anti-natural ambition in life, marauding nature and its gifts. Maybe yes. This quest for an answer in layers of mystery is the quest for truth, for which we have less time these days. Our journeys are gradually getting more aimless, wanton and utterly selfish. We are going away from nature, which is essentially the reason of our existence.

Was Fani a lesson, a natural cycle, whose time had come, a reminder, nature’s rebound action or a tight slap to correct our delinquencies? We don’t know but unless we know, the purpose, if there was any at all, would be lost.

Amidst the quandary between believers and non-believers lies the fact that it’s a repeat call to action. In my perspective, nature and super nature are the same set of cosmic templates and it is quintessential that we respect nature. Climate change is not a jargon or a developmental theme anymore. It is here and now.

Malika, a prophecy by saint Achyutananda Das seems to suggest that one day the deities will abandon their abode, as Puri will be submerged by the sea due to global warming and subsequent rise in water level. This gains more currency among the believers because it is construed that his prediction in Malika about the 1866 great famine, 1999 super cyclone, currently soaring heat waves due to global warming and other major catastrophes in the country have come true.

This is no doomsday prophecy nor is this an apology or an alibi. It is the truth that unless we treat nature, which we have not created but are enjoying, with ultimate reverence, even Lord of the Cosmos will suffer. He would suffer because he is Bhakta’s Bhagwan or the believer’s Lord. Lord Jagannath is absolutely devotee-centric. He can’t desert the devotee. For any mortal who serves Him with complete faith, both in prosperity and adversity, He always reciprocates. He is blindly in love with His faithful devotees.

“O descendent of Bharata, faith manifests in everyone (or everywhere) according to sattva. A person is made up of faith only. He is surely what his faith is.”

The Supreme is here with us.

Neither have I stayed in the heaven nor even in the heart of saints. I reside in that place where my devotees pray / worship

Let’s pray to nature and rebuild the faith.

Disclaimer: The views and opinions expressed in this article are those of the authors and do not necessarily reflect the official policy or position of  the web portal.