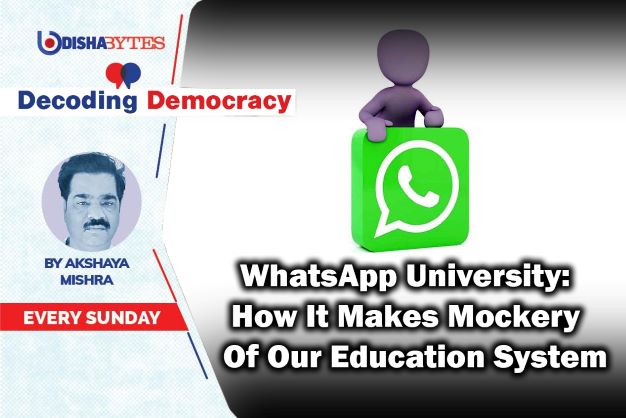 The incredible success of WhatsApp University as disseminator of information and knowledge should inform us about the many failings of our education system. It should also warn us against making good education inaccessible to masses, and about the big risk involved in turning it into an intellectual barrier.

The opening lines sound bizarre alright. WhatsApp University is a derisive reference to the messaging platform, but it can include similar platforms and the whole of social media as well. And it’s no good. We know it spews information and misinformation at breathtaking pace. While operating through forwards at milli-seconds, it usually makes mockery of truth. There’s little room for veracity check of information being passed around. Facts get concocted and mixed up with personal opinion with ease. They can get overwhelmed with the sheer weight of number of likes or emojis of appreciation for the latter.

Members of WhatsApp University can create false history and entirely new narratives for events around based only on imagination. And they can reach out to people at amazing speed in the language they understand and in ways they can comprehend.

WhatsApp is more prominent among all platforms because the content on it cannot be monitored or filtered as the users are protected by end-to-end encryption. There are close to 500 million users of this messaging app in India, the largest in the world. And the number is growing in leaps and bounds. However, the discredit it has earned so far goes for other platforms as well. All are callous with and irreverent to the idea of sanctity of information.

With eyes firmly on revenue and expansion of subscriber base, none seems to be mindful about the dangerous consequences of normalising falsehood. Of course, they have a potent rebuttal: technology is neutral, it’s up to users how they handle it. They offer a platform for communication, they are in no position to control what is communicated.

True. It finally comes down to users. WhatsApp University preys on the gullibility of people. Worse, it is believed as genuine. That is where the assessment of our education system comes in. People believing unflinchingly whatever the social media dish out include the supposedly well-educated too. In fact, they turn force-multipliers in the spread of misinformation as they are more widely networked online, and offline as well. What they forward and generate is trusted by recipients.

Now, good education, it is said, sharpens the mind. It hones the mind to do logical thinking while evaluating and assessing information. The processor in the human brain whirs fast and discards what is not logically tenable or does not add up to form a well-rounded theory. Good education prepares one to tune the mind to that process. Curiousity, doubts and questions form an important part of it, as do primacy of facts. When any information is accepted and digested without any of these, you know education has failed.

WhatsApp University has virtually created a parallel system of education. Speak to people in small towns, villages and even in urban areas on issues of import and you are likely to be shocked at the facts many juxtapose to yours. Their arguments and conclusions on each is often based on facts which you never knew existed. It’s likely that your knowledge, earned through years of traditional education, would be called junk, the same way you term their knowledge junk. When alternate facts capture minds with such ease, it’s time to ponder whether our education culture reached deep and wide enough in terms of impact.

In WhatsApp University, conclusion on issues are drawn first, then facts are cherry-picked to justify it. It’s quite unlike what conventional education teaches you. In the case of actor Sushant Singh Rajput’s death or that of Aryan Khan’s drugs case, the reversal of the logical process was evident. In both cases, neither a court verdict nor any official denial would make a difference to public opinion.

The potential danger to rule-based organisations from it needs no overstating. We may soon have a perverse version of khap panchayats online deciding serious matters of our lives. Does our education process lack something which allows such trends to spread? Perhaps yes.

Education in our society doesn’t necessarily ensure smooth flow of knowledge from the intellectual elite downwards to the masses. It creates silos of privilege and benefits into which the entry of outsiders is restricted. Take our legal language for instance. It’s beyond the capacity of the common man to comprehend, let alone interpret. It makes even simple matters look incredibly complicated.

Our education system does not even try to take basic legal knowledge to people. The same is true in all other areas of our lives. Academic knowledge stays confined to institutions. Someone must ask how many of our PhD theses — they are produced in large numbers in universities — are actually of practical utility to people or help nation-building. The point here is if knowledge generated at the top does not transcend to people, they become vulnerable to manipulation. No wonder WhatsApp University has made the huge space left open by conventional education its happy stomping ground. The dominance of English as the language of the elite has accentuated the problem of free communication. This we shall discuss in another article.

Is there a solution to WhatsApp University? No, unless the educational system rides on the social media bandwagon to reach the masses. Offline and online education should have a seamless integration for this purpose. It would call for will and sustained effort. It might take a while.