Wordle – My Daily Dose Of Dopamine 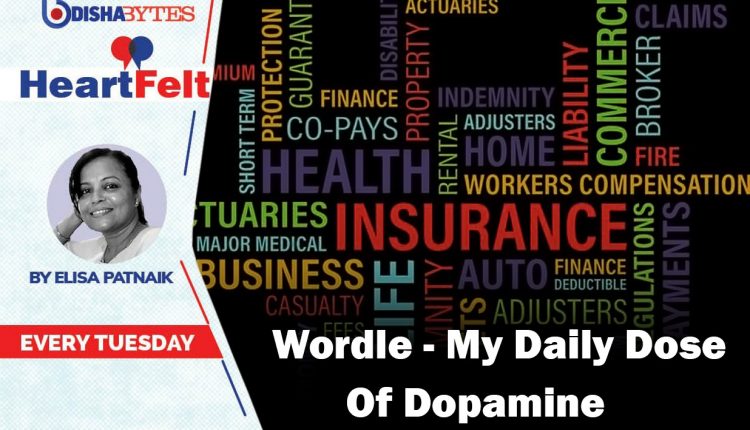 Every morning, apart from my steaming mug of tea and the daily newspapers, there’s something else that I now eagerly look forward to – the immensely popular word puzzle Wordle. Also, on days when I am particularly feeling  weary, unproductive and low, I am so thankful there is Wordle at least. And even in a day if I fail sometimes to exercise, eat healthy or unable to complete my assignments, I know I will achieve one daily goal nonetheless – solving the Wordle puzzle. Even though I play it every day, I still feel a sense of achievement if only for a few moments of the day.

I know, it’s not just me. The yellow and green coloured squares and 5-letter words have suddenly become the toast of the season all across the world. With nearly two million people playing it daily, it’s unlike any other word puzzle so far.

These days, I am always on a lookout for appropriate 5-letter words, more the vowels in it the better. There’s always a tingle of excitement each morning when I am about to type the first word. Every day, there is a new word to guess, and players get six chances to identify it. Will I be lucky enough to score on my first try and hit the jackpot today? Sorry, I’ve had no such luck until  now. But yes, my winning streak continues since the time I started playing in February this year.

When the software developer Josh Wardle first created and gifted the game to his partner during the COVID pandemic resulting from their mutual love for word games, little would he have imagined the humongous popularity leap the puzzle would take in the next few months. From late October 2021 when it first went public and became an online hit to the time when it was taken over by New York Times in February 2022, Wordle has become our daily treat. In fact, Wordle and the daily sharing of scores have become so popular on Twitter that some of the users have started muting the word.

A large part of Wordle’s appeal lies in its simplicity. It’s something that requires you to spend approximately three-five minutes a day (occasionally, a bit longer). It’s a word game that combines the right combination of challenge and attention that feels doable unlike other crossword puzzles, anagrams, jumbles, Spell Bees which can get frustrating and time consuming at times. Wordle is undemanding, easy and in contrast to most game apps you get to play only one puzzle per day. It does not include any gimmicks, levels, and is free to play. Moreover, with only one word per day one does not feel the stress or the fear of addiction that other games come with.

What I like best about Wordle is the way solving it seems like an achievement no matter how small, especially when other problems feel much more  overwhelming to deal with. Of course, your score on Wordle on that particular day does affect your mood a tiny bit. I feel elated on days when I guess the right word in my second or third try and glum when I get it on my 5th or 6th try. But yes, Wordle challenges your brain and also triggers a sense of personal achievement along with a modest dose of daily dopamine. This is indeed beneficial for mental health, as experienced by many during the pandemic, when it was first released.

One of the most interesting things that I enjoy about the puzzle is the randomness of it. I pick up words as per my mood and impulse. It can be anything, from ‘Fiery, Ghost, Aroma and Ebony to Staid, Burly, Scent or Foray.’ The luckiest few even have a winner in the first starter word which they had chosen randomly.

The words are common, but not too common. Sample this. While sometimes the words are as simple as “Tiger, Drink, Sugar or Chest,” mostly the answers are words like – “Squad, Royal, Slosh, Lowly, Vivid” etc. Sometimes, they are difficult to guess such as – “Wrung, Abbey, Shire, Knoll, Swill, Trope, Shard, Caulk, Truss etc.” But overall, it’s not really a test of someone’s vocabulary. The most difficult till now I guess, has been the word ‘Rebus’ which was the answer for January 1st Wordle this year.

Wordle is designed to slowly disclose the clues over the course of the game. For most, this gradual sense of understanding and insight with each try leading to the Eureka Moment which is rewarding.

While some players are methodical others are impulsive. The first word to  guess is vital and most players feel the best way is to choose a word composed of maximum vowels or commonly used letters like – “Adieu, Orate, Media,  Radio, Ration, Stair” etc. which helps in getting some letters out of the way immediately. While I spontaneously choose the first word, I am methodical afterwards where I often jot down the combinations and weigh the options before entering into the grid.

I love the history of it too, the way it keeps track of one’s score and show how you are progressing over the days. The personalised statistics reveal how many games you’ve played, how often you solve correctly, and also your wait in time for the next puzzle. It’s not only neat and uncomplicated, but sharable too where one can flaunt the scores.

Earlier, Wordle lacked the feature to share results until mid-December when  the creator noticed players sharing their results by typing out a grid of green, yellow and black emojis. So an automated feature was created for players to share their successes or failures without giving away the answers.

The shared social experience is a topic of conversation among friends, families and strangers on social media. Players play with their friends and family, sharing and discussing the experience. In my family, it’s my teenaged son and nephew who are my Wordle friends and we don’t hesitate to dash our grids to each other though we all play at different times.

Unlike other puzzles and games where a select or exclusive group of people  play, strategising for Wordle has become common since it’s played by a large number of players at a time. So much so that mathematicians and information theorists are also sharing success tips to maximise one’s chances of success!

But such is the temptation to win that a growing number of players have started cheating online for clues to the day’s puzzle. More and more people are seeking help from the Internet for solving their daily Wordle puzzle with search engines replete with sentences like – “five letter words beginning in…” or “ending in …” The game has spawned many clones too, such as Sweardle, Lewdle, Squabble, Dordle et al.

What’s about this simple puzzle that has captured the imagination of so many? Mostly, because it is fuss-free, accessible and yet challenging. But for sure, the immediate gratification right at our fingertips is another attraction. No matter how small, Wordle is an enjoyable respite from the ennui and stress of our daily lives. There is a slight intellectual kick too when you quickly discover the answer when your other Wordle friends are struggling.

A simple word puzzle is now a daily reminder of the humble, uncomplicated joys of life. It’s like one modest thing that’s solvable when so many other challenges seem overwhelming. For me personally, seeing those green boxes  when I get the right answer gives me a sense of satisfaction and joy. Though of course, I am still waiting for my jackpot, of getting all the boxes green in my first try.