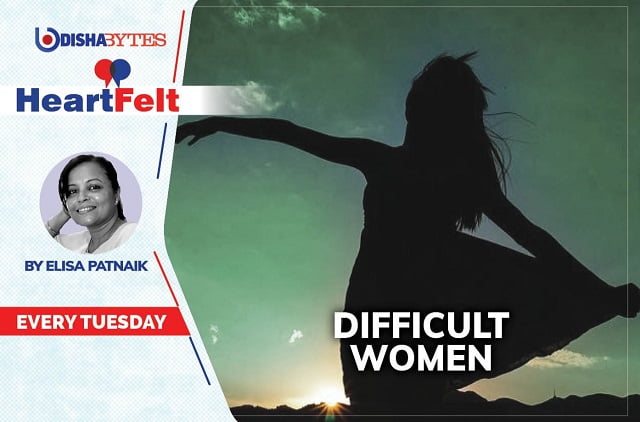 I am sure we all have come across such women with most of these attributes in our lives. Here, I’m not talking about women who are rude, cruel, thoughtless, offensive, or even demanding divas or prima donnas. But women who have charted a different course of life for themselves and implicitly for other women by simply being who they are.

Sometimes, these difficult women mortify and embarrass us. Even surprise us. And at times, they inspire us — with their courage, chutzpah and unconventionality. But most of the times, they continue to remain conspicuous by their radical thinking and fearless actions.

So who are these difficult women? Firstly, difficult means being complicated and intricate. Sometimes their personalities are tinted with shades of grey and they may not be armed with morally upright certificates. But they believe wholeheartedly in their cause, even if they are flawed elsewhere. They know how to stand up for themselves, speak their mind, and fight back.

But it’s not easy being a difficult woman. For you have to turn against the tide, defy norms, disobey the unwritten rules and challenge sexism. After all, no one wants to be labelled as difficult, problematic and a trouble maker. Or called a bitch, catty, bossy and pushy. They are often called hysterical, panicking, emotional, or being obstructive.

We women are always taught to be nice, obliging, considerate, flexible, genteel, selfless, nurturing, enabling of others, composed, supportive and perfect. Any deviation from these attributes is frowned upon and the women flouting the traits are castigated for being “unwomanlike,” unreasonable, selfish, aggressive and unfeminine.

We are conditioned to accept injustice, ill treatments, insults, being side-lined and are not allowed to voice our anger and frustrations about all the inequities we face, as women. We find it hard to voice our feelings and needs. And those who do, are the bad girls and the difficult women.

Women who are loud, brazen, sassy, single-minded and women who feel and express anger, protest, dissent, disapprove are always suspect. And our families, communities, society, institutions categorize them as difficult women.

The common refrain is, beware of such women, they are trouble makers. They are considered as odd balls and obstinate. The woman who files a case of sexual harassment in office, the woman who slaps the man in the bus for groping her, the married woman who fights a prolonged legal case against her rapist, the single woman who doesn’t hesitate filing a complaint against her abusive partner, the two women in a same-sex relationship who marry each other, women who manage their constituencies but are often away from their own homes…

Ambitious women are difficult women too. As women, we’re socialised to be acquiescent and gentle. Ambition, drive and focus are assumed to be incompatible with our expected image. Women are easily accepted and admired for being warm, friendly and womanly rather than being competitive, driven or powerful. While ‘ambitious’ is accepted as a compliment for men, it is considered as a criticism of women.

Acclaimed author Cheryl Strayed says, “history shows us inspiring examples of difficult women who, instead of carrying out the wishes of others, did what they wanted to do, the way they wanted to do it. Without apology, they decided to be ambitious and bold, adventurous and emotional, brainy and defiant, incorrigible and outlandish, determined and badass. They said no in a world that expects women to say yes, and yes in a world that doesn’t even bother to ask them the question. Their stories matter because they teach us how to live, much in the same way that old, outdated-from-the-start rule book on being female tried to do.”

Importantly, these are the women to whom we owe our rights and entitlements to. Who by toppling the status quo create new progressive pathways in our society. Thanks to these unreasonable and difficult women — who fight against established systems, discriminatory institutions and challenge the most fundamental structures of our society — we have had several landmark and historic decisions.

“Being exceptional requires a thousand small selfishness, and the world was not ready for women to be that difficult. It is still not ready,” says Helen Lewis, author of Difficult Women: A History of Feminism in 11 Fights. The book examines the victories attained by 19th and 20th-century feminists that many of us take for granted, like the right to divorce, vote, study, work, enjoy consensual sex, compete in team sports, abort a foetus or escape violent partners. These women have paved the way for us by demanding rights, choosing their aspirations and by asserting their agency.

Lewis shares that “Feminism has a particular duty to fight “the tyranny of niceness” — which is, and has always been, one of the most potent forces holding women back.” She writes that Feminism is not a self-help movement, dedicated to making everyone feel better about their lives. It is a radical demand to overturn the status quo.

Changing the course of history, established customs, rules and practices is not easy, especially for women. It is an intense struggle, a heavy burden which these difficult women accept and carry. They cause trouble and upset things, triggering social, political, legal and cultural change. They may not be perfect. And sometimes, they may be selfish, doing it for themselves. But their actions definitely herald the winds of change for others. They are also symbolic of the fact that one doesn’t have to be perfect to fight for equal rights.

Like difficult women, do we have difficult men as well? Not really. Men hardly experience sexism or misogyny. A typical, able-bodied heterosexual man doesn’t get to fight much against discrimination or chauvinism. The traits embodying difficult women are often considered natural in men or are celebrated as ambition, drive, acumen, tenacity, persistence and machismo. Many a times, those very things that difficult women do and are judged for, are things which are perfectly acceptable in men.

It’s interesting to note that women often veer towards being ‘difficult’ as they grow older. Or rather, they like being difficult women. They stop pleasing people, they learn to say no, they do not hesitate to speak their mind, they confront a problem, do not take no for an answer and challenge expectations. As they get older they realize that the traits, which were considered nice, compliant and feminine, were actually misconstrued as passivity, submissiveness and actually inhibited and hindered them.

“Well-behaved women rarely make history.” This was rightly said by Laurel Thatcher Ulrich, the Pulitzer Prize-winning American historian. I find difficult women inspiring. Some of my favourites among them are — Ismat Chughtai, Indira Gandhi, Kiran Bedi, Mary Kom, Neena Gupta, Frida Kahlo, Gloria Steinem, Oprah Winfrey, Maya Angelou, Hillary Clinton etc. There are others too, who may not have attained fame or celebrity status but still continue to do what they choose rather than what’s expected.

In her book In Praise of Difficult Women: Life Lessons from 29 Heroines Who Dared to Break the Rules, author Karen Karbo narrates the imperfect and extraordinary legacies of 29 iconic women in modern history who forged their own unique paths in the world. The writer spotlights the spirited women rule breakers — Amelia Earhart, Hillary Clinton, Amy Poehler among others — who charted their way with little regard for expectations.

For me, being a difficult woman is a compliment rather than an insult or a derogatory label. The lives of difficult women may be imperfect, chaotic and arduous. But it’s also liberating, glorious and rewarding. We women should, in fact, all aim to be difficult women at different points of our lives. As the much-loved primatologist Jane Goodall had once said, “It actually doesn’t take much to be considered a difficult woman. That’s why there are so many of us.”