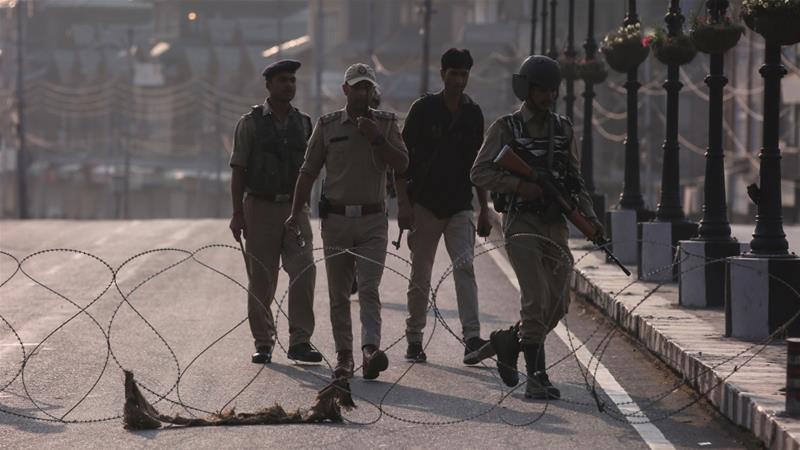 In a bold historic move, Prime Minister Narendra Modi’s government has scrapped Article 370 and 35 A, revoking the special status to Jammu and Kashmir and integrating the border state fully with India.

With this single step, BJP has fulfilled its wish to make J&K truly a part of India for which it had been striving for years now.

It perhaps needed a maverick PM like Modi for taking the bull by the horns because till date, no other PM had dared to touch this highly volatile issue. The fear obviously was of “catastrophic” repercussions and seriously suffering political fallout.

But then strongman Modi really proved his ‘56 inch chest’ and ‘ghar mein ghus ke maroonga’ image by dismantling the entire edifice of constitutional road blocks in the form of Presidential order of 1954, Article 370 and Article 35 A, at one go.

In a signature move typical of the Modi government, everyone in the country was kept guessing as to what exactly was afoot in J&K until Union Home Minister Amit Shah addressed Rajya Sabha on Monday morning.

The tense build up with massive troop movement to J&K, Amarnath Yatra being cut short, tourists and students being asked to leave immediately, telephone and internet services suspended, movement of public in main Srinagar city restricted and Section 144 imposed, led to sufficient amount of fear being created so that no mischief monger would even try any kind of misadventure.

Mehbooba Mufti and Omar Abdullah were among several leaders who were put under house arrest.

Interestingly for the BJP, this was one issue which has been with the saffron party from the days when it was known as Bharatiya Jana Sangh, the political wing of pro-Hindu RSS.

The founder of Jan Sangh, Shyama Prasad Mukherjee had opposed the move of accord Special Status to J&K from the very beginning and had pointed out that it would create “a state within a state”.

For BJP, it has always been an emotive issue. More so because the firebrand Mukherjee had died in detention after he was arrested for entering Kashmir (as a protest) without  permit, which was mandatory for all Indians.

Interestingly, this was the seed of the marked difference of opinions between BJP and Congress on this issue today. Mukherjee’s challenge to Nehru was, “If India’s Constitution is good enough for the rest of India, why should it not be acceptable to the state of Jammu and Kashmir…”.

Nehru and Congress had not allowed it as long as they were in power. But times have changed. Today Congress itself is not what it was in Nehru’s time.

By including the scrapping of controversial Article 370 and Article 35 A in its election manifesto for the first time, BJP this year had made it clear (at least to its core constituency) that it has not deviated from its basic ideological stand.

Apart from the Ram Mandir issue, the other highly polarizing and emotive issue in the BJP’s arsenal was Articles 370 and 35 A.

Look Back At History

To understand the significance of Monday’s developments, we must look back at history. At the time of India’s independence, 565 princely states which together held nearly half of India’s geographical area did have a choice to become Independent or individually accede either to Pakistan or to India.

All credit goes to the tough statesman Sardar Vallabhbhai Patel who used both diplomatic and military skills to bring 562 states within the Indian fold.

The Muslim-majority Jammu and Kashmir region under the rule of Hindu Raja Hari Singh kept delaying the decision either way perhaps wanting Independent status like some other princely states.

But in late October 1947, when armed tribal Pashtoons from Pakistan invaded Kashmir even as Hari Singh faced rebellion and violence from certain areas in J&K, the king’s hand was forced. It’s history how Hari Singh signed the Instrument of Accession and Indian troops were rushed in to throw out the insurgents in a day.

Pakistan naturally cried foul alleging that Instrument of Accession was given under duress, which was stoutly rejected by India. The bone of contention was whether Hari Singh had signed the Accession before or after the arrival of Indian military. But what actually transpired on those two crucial days of October 26-27, 1947 is mired in controversy. Thus began the decades old Kashmir dispute and conflict with Pakistan, which continues till today.

India’s official position has been that the Instrument of Accession was signed on October 26 and was accepted by Lord Mountbatten, then Governor-General of India, on October 27, 1947.

Unlike Accession Instruments signed by the other princely states, Kashmir’s accession was conditional—it demanded and got special privileges from India at the time of the accession itself. Clearly the other states of India did not make such demands and perhaps India would not have fulfilled them because they were not strategically important as J&K, which is located at the international borders with Pakistan and China.

According to the terms of the Instrument of Accession, India’s jurisdiction was to extend to external affairs, defence and communications only. On all other matters, the government of Jammu & Kashmir was free to make its own laws.

The Indian Constituent Assembly framed and adopted Article 370, which ensured the special status and internal autonomy for J&K, with Indian jurisdiction in Kashmir limited to the three areas agreed in the IOA—external affairs, defence and communications.

Other constitutional powers of the Central Government could be extended to the State only with the concurrence of the State Government.

It allowed J&K to have its own separate Constitution, flag, and even its own President and Prime Minister.

The state had its own President and Premier till 1965, and its own constitution, flag and penal code because of its special status accorded under Article 370.

Article 35A was incorporated in the Constitution allowing the J&K Assembly to decide who all are ‘permanent residents’ of the State and confer on them special rights and privileges in public sector jobs, acquisition of property in the state, scholarships and other public aid and welfare. The provision mandated that no act of the legislature coming under it can be challenged for violating the Constitution or any other law of the land.

The BJP’s grouse was that Article 35 A restricted citizens from other parts of India from getting employment or buying property within Jammu and Kashmir a clear violation of fundamental Rights under Constitution of India.

For the right wing Hindutva party like BJP which grew out of RSS having visions of ‘Hindu Rashtra’, J&K’s special status was against their nationalistic concept of one nation, one Constitution and one flag and therefore scrapping  it has always been one of its main agenda even when BJP had just two members in Parliament.

The ideological and political goal was to be fulfilled whenever BJP came to power.

On Monday, Amit Shah said very clearly that now “the entire Constitution will be applicable to Jammu and Kashmir”.

The government also lifted a ban on property purchases by people from outside the state, opening the way for Indians to invest and settle there like any other part of India.

The demography of the Muslim majority state may change with people from other religions, primarily Hindus, settling there.

The move was made at a time when there was President’s rule in the state making things much smoother.

Second, with heavy deployment of para-military troops, the government is not going to take any chances. The Modi government has also made it very clear that it has zero tolerance for terrorism, whether coming from Pakistan or within the country.

With its no nonsense attitude, the Modi government has made it very clear to even US President Donald Trump that on the issue of J&K, it would not like to have any mediator.

Pakistan can cry hoarse, but after the Masood Azhar episode when even China supported India’s stand, it is not likely to internationalize the Kashmir issue, which is very much an internal matter of India.

The integration of J&K with India and turning it into a Union Territory will not only bring it within the administrative power of the Central government which is of utmost importance looking at its strategic importance as a border state, but scale up its developmental process as well.

This would be particularly important looking at the fact that the state had till now been left out in many of the progressive steps which were taken for the rest of the country. It would require many years of hand holding by the Centre to bring it at par with other states in many fields.

Calling this major step as darkest day of democracy, murder of democracy by opposition leaders shows their desperate attempt to cling onto an old framework that seems to be becoming completely redundant in today’s world.

Triple talaq has been made into a criminal offence, a progressive step for Muslim women, taken by the Modi government almost as soon as it got its numbers in the Parliament. The step took decades to come because many earlier governments let Muslim women suffer because they feared the massive backlash and reaction from Muslim clergy and conservative Muslim men.

Finally, the step has been taken. Has there been any reprisal from Muslim men? No, because in the modern world, both Muslim men and women understand that many obnoxious practices being continued in the name of religion have to be given up and they should not block these steps.

As Articles 370 and 35 A have been removed to fully integrate one of the most beautiful states into India after so many years of Independence, to make its populace share the benefits of development in the field of tourism, health, education and industry, the people of Kashmir are going to welcome it belying all the naysayers.