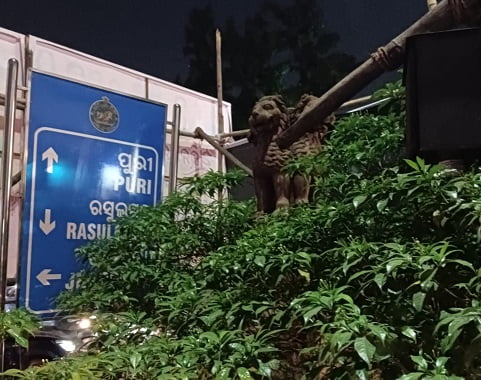 The roundabout where the Satyanagar flyover ends has the national emblem of India, the adaptation of the Lion Capital of Ashoka, a statue from 280 BCE. A stone carved emblem had been put up in the roundabout when the flyover was completed.

But, it is completely hidden by vegetation planted beside it, who and why did this is not known. To add insult to injury, even what little is visible of the national emblem is now covered on four sides by large flex hoardings of different political parties and local leaders.

This act of sacrilege to the National Emblem is a punishable offence under the Prevention of Insults to National Honour Act, 1971 and the Schedule of the State Emblem  of India (Prohibition of Improper Use) Act 2005.  Such acts are punishable under Section 124(A) of the Indian Penal Code, and the offence refers to sedition.

I have serious doubts of the learned elected representatives, whose pictures are there on the hoardings, are even aware of this. Most of them are put by flunkies. 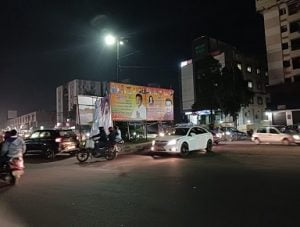 A police patrol jeep is permanently parked at the square and traffic police have a permanent checking point there. Hundreds of officials pass the point.

In a similar incident, the Governor House and the Gopabandhu Nagar roundabouts were the centre of ire by local groups and those had been torn down. 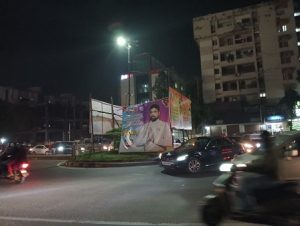 The authorities should immediately remove the hoardings at Satyangar roundabout and ensure that such insults to national emblems should not happen again. The vegetation too should be pruned and the emblem should get its place of honour as deserved. Proper lighting at night should be used. If this cannot be done, it will be better to remove it and keep it in a suitable place where it will not be defiled.

The hoardings are also a traffic hazard as they restrict visibility for motorists descending from the flyover. This is an accident prone area, with many mishaps taking place. The Laxmisagar police station has been requested to take action. If the hoardings are not removed, an FIR will be filed at the police station.