Renovated Rani Bakhri To Open Another Historical Chapter In Sambalpur 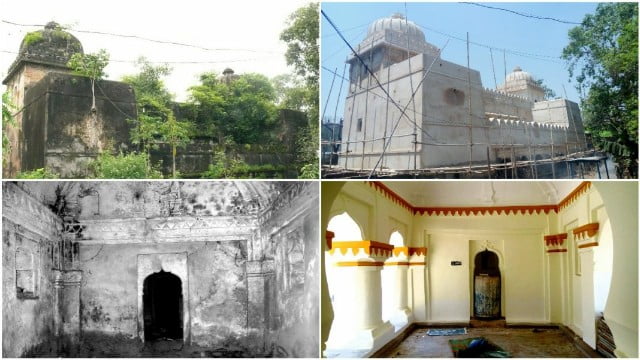 The renovation of Jemadei Mahal, popularly known as Rani Bakhri or Queen’s Palace, here is nearing completion. “The motifs inside the monuments are being painted and restored. We will be done with giving final touches to the structure by June-end,” said Deepak Panda, member of INTACH, Sambalpur Chapter.

INTACH has used traditional methods to restore the Mahal’s past glory. “The renovation work has been carried out without tampering the original structure. After stitching the cracks, fresh plastering was done using a paste of lime, gun of Bael (wood apple), Ritha (wash nuts) and jaggery,” he said.

The building was lying neglected till INTACH took it up in 2017 after its Sambalpur chapter was formed. Many people were not even aware of its existence despite the fact that it is only about 100 metres from the temple of the presiding deity of the city.

Rani Bakhri was built by the fifth king of Sambalpur,  Baliar Singh in the 1650s as an additional palace for the queen. it now bears the name of his daughter, Jemadei. LEGEND has it that he built the palace as a mark of love for his daughter.

“I had climbed atop the building in 1989. It was in a precarious condition. It had developed cracks and plants had grown all over it. The roof on the second floor was also missing,” he said.

In 2001, the roof of Rani Bakhri was rebuilt and repair work was done at Raja Bakhri with grant money dispersed by the Central government under ‘Project Odisha’ scheme. The work was taken up by State Archaeology Department, Panda further said.

Plans are afoot to develop the surroundings and a lawn, he said, adding that there is a proposal for an art and photo gallery, where paintings of renowned painters of the region will be displayed, inside Rani Bakhri.

Adjacent to Rani Bakhri is Raja Bakhri, which is in an equally bad shape. “We wanted to take up Raja Bakri first, but the Culture Department sanctioned Rs 1.5 crore for Rani Bakri after we submitted a detailed project report for it,” he said.

These two buildings are the only two that remain of the cluster of palaces built by different kings of the region. W. R. Gibert, a political agent of the British, had painted a picture of the cluster in 1825, highlighting the magnificence of the era. The painting is now Housed at The British Library in London. The oldest among these, Jaru Mahal, was built by Balabhadra Sai in 1600. However, it was reduced to dust due to decades
of neglect.

According to Panda, Rani Bakhri is architecturally richer than Raja Bakhri, which was built by King Chhatra Sai in the beginning of the 17th Century. “These are called Bakhri because that is how people address a ‘kothi’ or multiple-storey building here. Rani Bakhri is a three-storey structure and sports a Rajasthani style of architecture. The structure of the tombs and the motifs reflect the same,” he said.

Contrary to popular belief that Rajasthani miniature paintings once adorned its wall, Panda said they are actually Odishan paintings like Pattachitra. However, water seeping through the roof has already erased many of them.

The Raja Bakhri is bigger in size and has around 40 rooms. “Spread over an acre, it is a modern building. This too, is without a roof. Some roof work was carried out at Raja Bakhri from the grant we received from the INTACH central office as an emergency fund,” he said.

On October 7, 1857, freedom fighter Surendra Sai came to Sambalpur with 1,200 supporters and stayed at this place for a few days. the National flag was also waved from Raja Bakhri during the
freedom struggle.

INTACH has prepared a detailed project report for Raja Bakhri too. “We will need around Rs 4.5 crore for the renovation of this structure,” he said.

However, the problem does not end with renovation. There is no proper approach to these monuments. “In the 1960s, plotting was done by the government and land distributed among people. Since they are authentic owners of the plots, they will be given compensation to part with some portion of their land for laying the approach road. The Culture Department had sanctioned Rs 65 lakh for the acquisition of land. We are not aware where the sanctioned money is. We will take up the matter with the department and the Collector,” said Panda.

Once everything falls into place, these monuments will be another spot of tourist attraction in Sambalpur, he added.