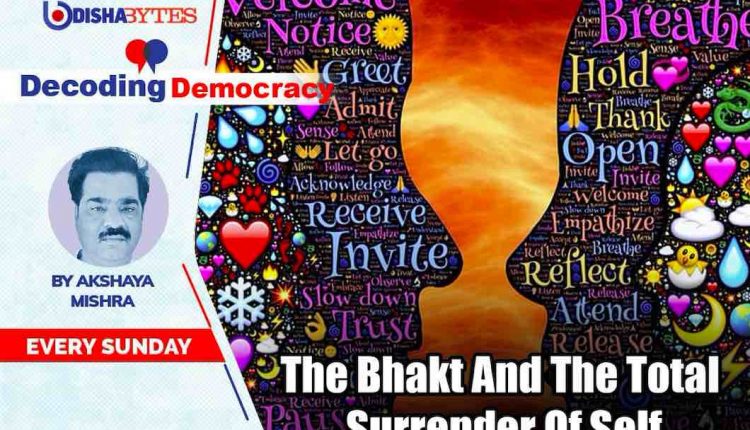 ‘Bhakt’ is a maligned word in our world.

In the current definition, the word refers to a person prone to expressing excessive devotion to the subject of adoration. The devotion can go to the point where the ‘bhakt’ loses the capacity to think, judge and have a view separated from the latter.

To an outsider, he might be a person low on self-esteem, confidence and capacity for freethinking. His mental capacity is limited to idolizing and lionising a bigger entity, into which he submerges his entire identity.

The word has gained wide currency after the arrival and ascent of Prime Minister Narendra Modi on the national stage and is primarily a pejorative reference to his die-hard followers who would go to any extent to defend him. It is no surprise that those using the word often are political and ideological opponents of Modi who just can’t digest his immense popularity, and the fact that they have not been able to find their own followers or have alienated them.

However, it has to be underlined that the ‘bhakts’ are not a unique creature of the Modi era or that of Right-wing politics; they existed earlier too. The Communists and the Congress possibly had a bigger circle of ‘bhakts’ in their heyday before losing them over time. The personality traits of both were similar.

This definition surely trivialises the concept of ‘bhakti’ which has deep roots in the pan-Indian socio-religious culture. It goes back to the days of Upanishads, Shrimad Bhagwat Gita through the Bhakti movement of the 15th and 16th centuries in the North and earlier centuries in the East and the South, and involves the great spirit of surrender and sublimation of self in the higher being. It was a path for the union of the individual with the infinite or divinity.

No hurdle of caste or class or other identities raised by minders of traditional religion mattered as the ‘bhakt’ embraced the deity of his choice. The Bhakti movement of earlier days has been called a protest against religious orthodoxy and social inequality. Whatever it is, the essence of it is total surrender and complete faith.

The ‘bhakt’ often gets confused with the sycophant or the moron. But they are different categories altogether. A sycophant is a self-serving individual whose devotion is solely guided by private gains from association with the higher being. It is more like the relationship between bosses and their flunkeys in offices. The relationship is transactional, and loyalty transferable. The moron just cannot much sense of the world around and has to follow someone superior instinctively. Since he cannot judge or decide by himself, he feels safe leaving the task to someone better.

A ‘bhakt’ may appear to be a bit of both from his conduct but in his case the willingness and the ability to let go of his ego, individuality and intelligence unconditionally just for trust in someone stand out. He can be pragmatic in his own way.

Bhakts are important in a democracy, at least in politics that drives democracy. They are not fence-sitters who lend unpredictability to the fortune of parties. It’s in the interest of the latter to expand the base of devoted followers. That is one reason we find certain urgency in our polity to divide people, turn disagreements into conflicts and push them into rival camps.

It’s a worldwide trend. The more people surrender their capacity to think independently and make objective judgement the easier it is for parties to control them. They also become effective, no-cost propagandists for parties at all levels. Since they would accept and disseminate any information without questions, they are a good bulwark against campaigns by rivals.

A bhakt, for example, need not understand the intricacies of diplomacy and foreign policy to take a position on Pakistan or the US or China, the fact that worshipped leader or party he heads has a certain stand is enough to convince him of its infallibility. The same goes for all issues. Of course, it all revolves around the object of adoration – the deity. If it is Modi now, it was Indira Gandhi earlier, and Jawaharlal Nehru before her. While leaders are aplenty, only a few get elevated to that position. Charisma sets apart the ordinary leader from the exceptional. Modi is, beyond question, exceptional.

Modi bhakts, however, are distinct from the earlier breed, the key differentiator being technology. While the devotees of earlier leaders were a scattered bunch, living in silos, the present ones are well-networked via social media. Networking has made group identity stronger and facilitated better in-group coordination and organisation. They could be co-opted into any agenda of the party and used in offensive and defensive roles as the situation demands. They, in short, can be weaponised by the party’s efficient propaganda machinery.

The point of this article is not to judge but to observe the arrival of new forces at work in our democracy. We have already discussed trolls and hyperbolic television anchors, ‘bhakts’ are another category. Their role as influencers in democracy is undeniable. Given social media’s capacity to create networks, and facilitate quick multi-way conversation, they are here to stay. Smart political parties know how to leverage their potential, but dumb ones stay in denial.

Coming back to the ‘bhakt’, he has a mind that is uncluttered and which responds to emotions more than reason. By surrendering to the superior being, he relieves himself of the burden of making decisions on matters far beyond his comprehension. The deity must respond to his unqualified trust by ensuring that the devotee does not feel betrayed. He has to provide the latter with a sense of emotional fulfilment. The bond has to be renewed and reinforced continuously. Political forces of the earlier days became too arrogant to acknowledge this. They are paying the price.

To sum up, never underestimate the ‘bhakt’. He is a force multiplier for his deity. Just admire his state of bliss.

Biotechnology In Odisha: Why It’s Important For Universities To Collaborate…