It was a bright morning in Port of Spain on September 5, 2019, two days after my arrival. It was unlikely to rain, at least for the next few hours. This place experiences only two seasons, besides an occasional mild tremor. Wet and dry. Wet from January to December and dry the next half of the year. I was scheduled to present my “letter of credence” to Trinidad and Tobago’s President in the forenoon. 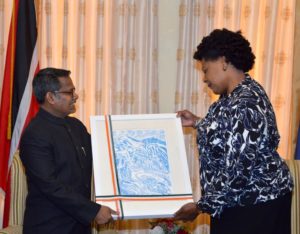 The essence of this letter is to convey that as the Ambassador Extraordinary and Plenipotentiary of India, he has appointed me to speak on his behalf and asked her to give credence to whatever I communicate verbally or in writing.

As per existing practice, I had to present this letter personally to the receiving head of state in a formal ceremony. The grandeur of this ceremony depends on the diplomatic history and practice of the receiving country. Usually, it’s traditional and customary and hence elaborate.

An ambassador is the highest-ranking and hence “Extraordinary” government representative in a foreign country and with full powers and hence “Plenipotentiary” to represent his country and government. He resides in the capital city, and he is the head of the embassy in that city and all consulates in other cities in the country. The Ambassador’s official residence and the embassy are treated as Indian territory. 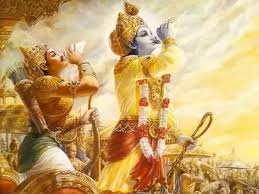 The profession of diplomacy has a long history, though modern diplomatic practices are a product of the post-Renaissance European state system. While foreign policy is the government’s policy to further its national interests, diplomacy is the instrument to achieve these goals. An ambassador is the eyes, ears and the voice of a sending government. He or she is the bridge and an adviser between two countries. He is expected to be experienced enough to handle serious issues and critical situations. He works towards building political, economic, cultural and people-to-people bridges to promote national interests.

Various texts of old civilizations such as that of the Middle East, the Mediterranean, India and China mention diplomacy. Homer’s Iliad and Odyssey carry evidence of Greek diplomacy. In 5th and 6th century BCE, Athens and Sparta formed alliances such as the Delian League and the Peloponnesian League. Rome inherited what the Greeks devised. As it expanded, it often negotiated treaties with the conquered areas to grant partial self-government. During the Republic, the Roman Senate conducted foreign policy and envoys were received with ceremony and granted immunity. In the Byzantium, diplomats were issued written instructions. After the Byzantine empire, elements of diplomatic tradition lived on in the Ottoman Empire and Renaissance Italy.

Hanuman in Ramayana and Krishna in Mahabharat are two greatest diplomats in early Indian tradition, which was systematized by Kautilya in his Arthashastra. Kautilya recognized three categories of diplomats: plenipotentiaries, envoys entrusted with a single issue and royal messengers. Similarly, by the 8th century BCE, the Chinese had leagues, missions, and resident envoys to exchange polite discourses between their many “warring states”.

The term “Ambassador” appeared in Italy at the end of the 12th century CE. In English, it first appeared probably in 1374 in Geoffrey Chaucer’s Troilus and Criseyde. Post-WWII, the Vienna Convention on Diplomatic Relations of 1961 formalized the system. 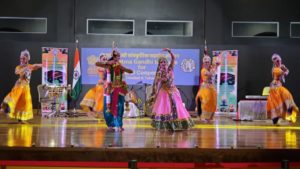 The appointment of an Ambassador is a relatively lengthy process. In our case, in consultation with the External Affairs Minister, the Foreign Secretary recommends the names to the Prime Minister for his approval. After Prime Minister’s approval, it is sent for the President’s consent. After his consent, Ministry of External Affairs writes to our embassy to ask for the host government’s agreement to receive the nominated person as the Ambassador in their country. Usually, the host government checks the antecedents of the proposed person before conveying their agreement. After receiving the agreement, the Ministry makes a formal announcement of the appointment. This procedure, in some cases, can take up to six months. The President’s office issues “the letter of credence” before a designated ambassador travels to assume his responsibility. After his arrival, the host government makes all logistic arrangements for this ceremony of presenting the credence letter. 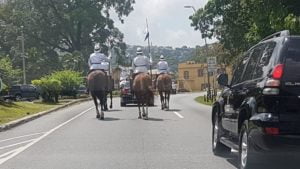 I was accompanied by my wife Sasmita Mishra, 11-year-old son Risi and a colleague of mine in the High Commission to this ceremony. A team of protocol officers guided us at all times. It was a car cade with escort and pilot cars and a ceremonial protocol car where Sasmita and I were seated. A second car carrying Risi and my colleague followed. The first engagement was to meet the Foreign Minister at his office before proceeding to the President House. As was officially required, I formally handed him a copy of “the letter of credence”. Welcoming us to Trinidad and Tobago, Foreign Minister Senator Dennis Moses exchanged cordiality words, assured of all possible cooperation and wished a pleasant stay for my family and me.

As we reached the President’s house, we were made comfortable by her protocol. After a few minutes, the formal ceremony began. We stood in our designated places. The master of the ceremony read out my brief biodata and introduced my wife, son and the colleague to the President. Then he requested me to present the letter of credence to the President. While handing over the letter, it was customary to tell the President, “Your Excellency, it’s my honour to present to you my letter of credence as High Commissioner of India to Trinidad and Tobago and …”

She received the letter with a “Thank You” and made us sit for a few minutes’ chat. But it lasted for about 15 minutes. She inquired about how I am finding Trinidad and Tobago, referred to their history, diversity and pluralism and hoped that during my tenure as Ambassador, relations between the countries would be even better. She asked Sasmita about her passion and profession as an artist and art historian. Sasmita presented her one of her paintings (The River Took Alka Away, Print-wood cut, 2010). She asked Risi, “How are you, young man?” Risi was not expecting, but was quick to reply, “Good. How are you?” All of us laughed.

The protocol ushered us to the yard, where the President’s guard played the national anthems of both the countries, extended ceremonial guard of honour with gun salutes. We took leave of the President, and the ceremonial horse carriage along with cavalry escorted us to the Foreign Office, on the way, passing through the famous Queen’s Park Savannah. As I was overwhelmed by the majestic ceremony, a shrill thought crossed my mind- “It’s lonely at the top.” As an Ambassador, one is the best judge of one’s decision. 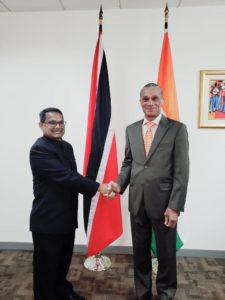 It’s customary to host a reception after the ceremony to express one’s gratitude to the officials and staff of the Foreign Office, the President’s Office and the local security. We organized one in the evening, to which besides the officials, we invited influential personalities, including NRIs, businesspeople and press. We had restricted the number to 250.

The reception is valuable not only for the Ambassador to meet prominent people but also to give his mandate and priority the broad message. The local press examines this message to understand the direction of India’s engagement with their country.

At the reception, the acting Permanent Secretary of the Foreign Office Ms Reita Toussaint represented the Trinidad and Tobago government. In her brief remarks, she recalled the historical and friendly connection between the two countries. She looked forward to working together to strengthen further India-Trinidad and Tobago relations in political, economic, cultural spheres and people-to-people contacts. In my brief address, I assured her of all cooperation. I referred to the three icons of independent Trinidad and Tobago, namely, Dr Eric Williams, the first Prime Minister, Sir V. S. Naipaul, the Nobel laureate in literature and Brian Lara, the cricket icon. I assured the gathering of all support in promoting friendship, goodwill, and win-win synergies for our two nations’ governments and peoples. I also made a special mention for increasing exchanges among the youths of our two countries.

The local newspapers covered the details of these exchanges, which set the tone for a new beginning for me in this twin-island nation of Trinidad and Tobago.

Trinidad & Tobago Diary Part I: Colours Of India In…