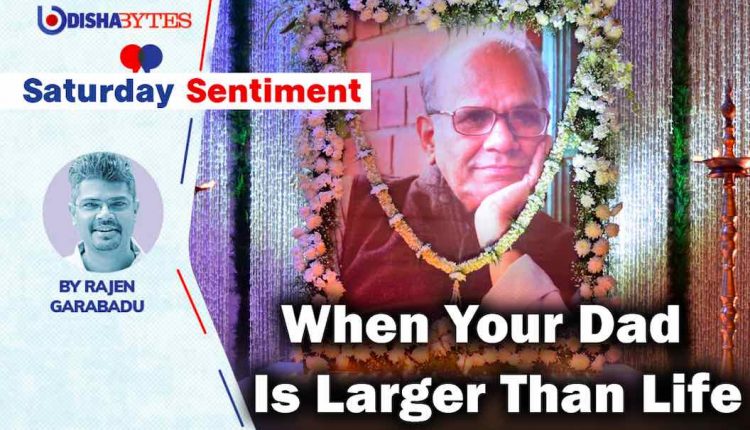 Why do I say that?

You will soon find out. But for those who don’t know him, here is a brief sketch of his career and character.

My father was many things to many people. But, mostly, he was a man of his word. If he gave his word, he kept it. Unflinchingly.

He was known for his unimpeachable integrity. And his magnanimity.

Finding joy in the art of giving

He was the go-to person in his extended circle of family and friends if they needed help. Money or any other assistance.

He enjoyed the art of giving and made it part of his living.

He always gave more than he took. He never spoke about it to his family. It was only after he left us did we get to know the extent of his magnanimity.

His friends and relatives spoke of how he offered financial, moral and other support even when it was not sought. Every now and then, we still get to hear them. Just last month, I heard something new from an uncle and aunt that left me spellbound.

He loved to take care of his near and dear ones in ways that’s tough to imagine.

A Toast to the Impeccable Host

Nothing gave him more pleasure than feeding those who came home. He would personally serve them food, insisting they accept a second and third helping – at times against their will.

He would ask mom to replenish or do it himself if he found an item consumed on any plate. His theory was if some dish has been consumed before or more than others, chances are it’s a preferred dish.

When we ate out in restaurants with his friends or extended family members, he would be the first to settle the bill. While entering, he would instruct the manager or the staff not to produce the bill at the table. He would quietly excuse himself and pay up at the cashier. Till it was time to leave, no one would know that he had already settled the bill.

He loved to carry the best of sweets, always pre-ordered and customised, when he visited friends and family. He loved sweets though he could not indulge in them due to his diabetic diet.

A Stickler for Time

He maintained a strict schedule six days a week. Every morning, without fail, he would set out on his walk at half past five. He would return home exactly in an hour and leave for work by 7:30 am. You could set your clock by the time he kept.

My dad was a first-generation industrialist during the licence Raj era when raw materials were rationed and routed by the state. He flourished because of the stringent quality checks he institutionalised as part of the fabrication process in his factory. He would keep a close watch on all aspects of production and would lash out at the workers if he found them cutting corners.

Steel structures and fabrications manufactured by Bizi Industries found pride of place in many homes and offices across Bhubaneswar and Cuttack.

He lost interest once the supply of raw materials was directly proportional to bribes paid to procure them. He was against the payment of bribes in any form. He sold his factory rather than succumb to the system prevailing at that time.

An Eye for Detail

He had an amazing eye for detail. Though he started building his home nearly 50 years ago, halfway through it, he broke it down as it didn’t match his vision. And built it again. It took six years to build it. The house became known as “White House,” named by a friend of our family. White was dad’s favourite colour. From his house to his cars to most of his shirts, he liked them white.  At home or work, nothing would miss his attention. He would fuss over straight lines and not be at ease even if there was a marginal deviation. He would check the alignment of paintings hung on the wall and furniture on the floor when he came home from work, if he felt they had moved, even marginally.

He sought perfection in everything around him.  He would not settle for anything less.

Ahead of his times

He was much ahead of his time when it came to innovations. The house he built had features and mechanisms which were unseen and unheard of at that time in Odisha. People from other cities would drop into our home and request permission to look around. They had heard about it and wanted to see it for themselves before building their house.

One such gentleman replicated the façade of our house in a different city. My dad was flattered when he got to know. Our garden was perhaps the most awarded private garden in the city. It was where dad was personally most invested while at home. He was always at ease there. He spent a large part of Sunday supervising the gardener in the manicure of shrubs and bushes. He would water the plants while our gardener pruned any excess growth. He felt most at home amidst his plants and trees.

My father was one-of-a-kind. He touched a lot of hearts in his lifetime. Those who incurred his wrath would remember the hollering for a lifetime. He cooled down as quickly as he flared up. Everyone who knew him well has a PL Garabadu story.

It’s exactly a decade since he checked out but we still get to hear anecdotes about his virtues. And sometimes his infamous temper recounted with affection and respect by his friends, acquaintances and extended family members. He was feared and respected in equal measure. Such was his personality. My closest friends called him King Uncle. He had a towering presence though he wasn’t physically tall.

He checked out of this world on January 7, 2013. But he never left. Ten years later, we still feel his presence. As do many others whose lives he touched. People like him never fade away. They continue to live forever. In our minds and heart.

Hockey WC: Sonu Nigam To Perform At Rourkela City Fest; Know How & When To Book Tickets