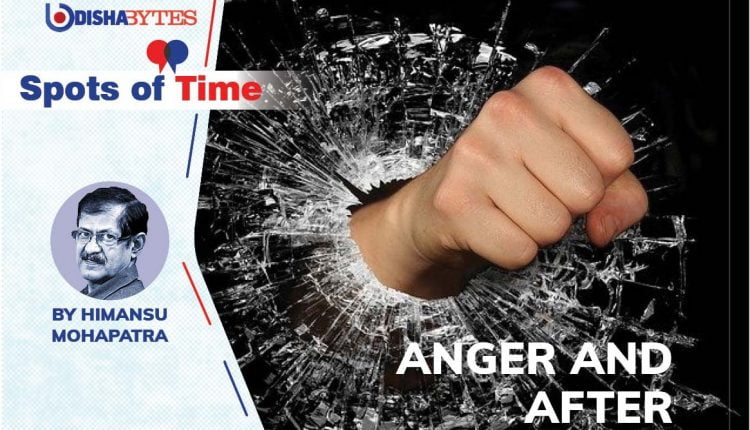 The other day at school their fifth class English Sir was giving a lesson on anger. He recited a verse before writing it down on the blackboard.

Anger is an evil thing that spoils the fairest face.
It cometh like a rainy cloud upon a sunny place.

“Now children,” said Sir, “I’ll tell you how you can best learn. Always think of a concrete example that will help you to grasp the idea by the scruff of the neck. See I gave you an image – scruff of the neck – in what I just told you. So picture an object or a person or a scene like that.”
Sir took a pause before continuing.

“Can you give me an example of anger as described in the poem? Tuku, you go first.”
“My father.”
“What? Did he hit you again last night in a drunken state?”

Tuku kept quiet.
“Suni, your turn now?”
Suni stood up, blushing profusely.
“Well, well, who can be angry with our Suni? She is such a sweetie. Well, how about you Subu?”

“What? You’re talking about Danda Babu of Baghra Road. A difficult man for sure. But what’s he got to do with you?
Subrat fell silent. Sir did not probe further.

Subrat had blurted out the name. Or it had forced itself out of him under acute psychological duress. He had a brush with Danda Mohanty only the day before. The bruise was fresh in his mind.
….

If there was a name in the whole of Baripada at the time, whose very mention made his seated heart knock at the ribs, it was Danda Mohanty. A giant hulk of a man, tall, bony and rugged. Though clad in a white dhoti and a long full sleeve shirt that came up to his knees, there was not the slightest suggestion of the bhadralok about him, as there was about his grandfather in his spotless white dhoti and panjabi. The man was positively ill-tempered, ill-mannered, harsh, hostile and frightening.

There was no escaping Danda Mohanty whenever Subrat went to the market, sitting on the front bar of his father’s bicycle. He so wanted to go to the market that promised such a feast for his senses. But Danda Mohanty would always descend on them like a bugbear out of nowhere, separating him from his pleasures. He would either accost them on the road to Gujuri Bazaar while biking down from the opposite direction or bear down on them at Sania Sahu or Panditji’s eatery as he sat down to savour the famous 2-rupee rasagolla. And then the most inhuman ragging of Subrat would begin no matter where, on the road or inside the eatery. He would be told to obey, to be good, and to not cause trouble. As an example of what would happen if he didn’t follow instructions, his ears would be boxed and the delicate skin on his arms and legs pinched. And, what was worst, the man would fix him with his angry and hateful stare, one that bored a hole inside him the size of a number 2 football that was given to boys his age.

To him the face spoilt by anger and clouded over – to the extent it can because the man was dark like a cloud – was always that of Danda Mohanty. If anger were to be visualised in human form, it would be him. The man far exceeded Tuku’s drunken father in virulence. After all, Tuku’s father hit him only when he was drunk. He was very affectionate otherwise and had bought for them a football the other day. But this man! He was anger and cruelty personified. He loved that people were scared of him. He also had a younger brother who, though less fierce looking than him in being fair in complexion, was no less fearsome. So the Mohantys went their way, cutting a swathe through the small town of Baripada in the 1960s. The irony was they were not goondas or anything.

What Subrat didn’t understand was why Danda Mohanty would pick on him, a boy of 9, and despite being his father’s friend, as his father gave him to understand. It certainly didn’t seem like it. His father never ever said anything while Subrat was being tormented and cowed into submission by his friend, not to mention raising his little finger. He stood quietly and smiled sheepishly or looked the other way all through the insufferable proceedings. It was as if he had handed over the rod to his so-called friend for the possible future lapses of his son. But he surely knew that his son was not the type to even swat a fly. He was the most docile, shy and scared boy that ever existed, one who felt secure at home, by his grandmother whose love for him was boundless.

In this world the dice was always loaded against a boy who was weak and one whom his father couldn’t protect. Subrat had an early inkling that he would hold it against his father for the rest of his life. And he did.
….

But what if his father was powerless before Danda Mohanty?

The possibility crossed his mind when he saw his father’s diaries after his recent death. There were several in his dilapidated tin trunk. An entry for September 1965 in one of them caught his eye:

“Danda is being brutal to Subu and I can do nothing but stand by. What must his mother in heaven think! The man is such a monster. He scares me too.”

Subrat remembered the line in the movie “Home Alone” spoken to Kevin by the much misunderstood old grandfather, who was Kevin’s Danda Mohanty through much of the movie.

“ One could be old for a lot of things, but never too old to be afraid.”
He shed a silent tear for his late father. A silent prayer too.

Did Mahatma Gandhi Refuse To Salute The Tricolour?

Pawns In The System