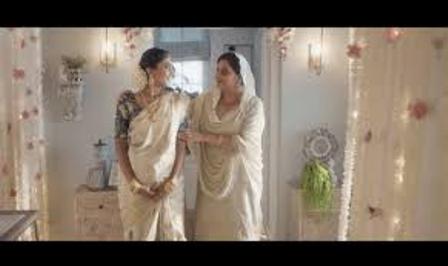 Ranchi: Tanishq, the jewellery brand by TATA, launched a new advertisement for the festive season on interfaith marriage on Friday. The ad, which gives the message of love and oneness regardless of differences in religion and traditions, has sparked a row.

The ad features a Hindu girl married in a Muslim family getting a surprise baby shower party from her in-laws. The girl at the end of the ad is shown asking her mother-in-law why they are celebrating the ‘godbharayi’ ritual even if this isn’t in their tradition, to which the mother-in-law reply because every daughter deserves love in all religion.

Though the makers of the ad had a good intention and positive message to spread, it boomeranged on them.

#BoycottTanishq started trending with the jewellery brand being accused of promoting love-jihad. According to reports, love-jihad or Romeo-jihad is a conspiracy theory on alleged efforts by Muslim men targeting non-Muslim women for conversion to Islam by pretending to be in love.

The term was coined after initial cases of conversion emerged in Kerala and subsequently in Karnataka.

As things got heated up, in response, Tanishq has disabled the comment section on its YouTube page. The brand has also been getting a lot of flak for that.

he is the man behind this anti-Hindu ad and campaign for Tanishq. He is brand manager @TanishqJewelry now you all know what to do#BoycottTanishq pic.twitter.com/4JZAggCWFd

Why are you showing a Hindu "daughter in law" to a muslim family and glorifying it?

Why dont you show a Muslim daughter in law in your ads with a Hindu family?

What #tanishq is showing – HINDU girl 100% safe in Muslim house

What actual happening – Hindu Girl trapped in love jihad and get killed.
Hindu girls are 0% safe in other religion houses. So Don't go by this sick company mindset ?#BoycottTanishq