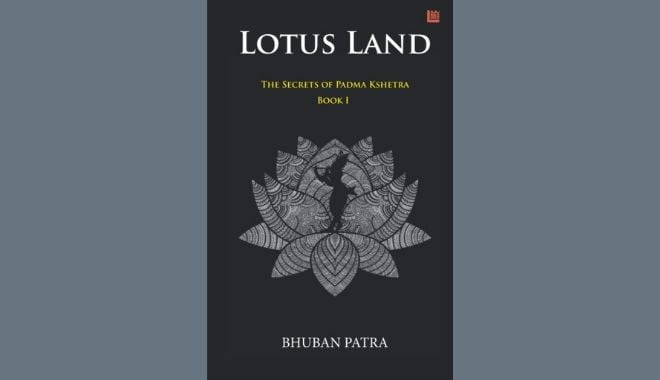 Man is said to be the master of his own destiny, and a people collectively shapes the destiny of a nation. Yet, at times providence picks up an individual to sculpt the future of a land, bringing it undying glory and divine approbation. Such a person is Bishnu Maharana, whose fortune, is deeply intertwined with that of the mighty kingdom of Kalinga, straddling the eastern seaboard of ancient Bharat. On the shoulder of Bishnu falls the responsibility of erecting a temple that must surpass the beauty and architectural glory of all the existing temples of Kalinga while it befits the stature of its ruler King Narasingha Dev, known for his benign rule, military might and love for art. Apart from these prerequisites, the temple must be a fitting tribute of the people of Kalinga to the sun god, the original source and sustainer of life force.

‘Lotus Land’ traces the journey of Bishnu Maharana, since his childhood, through his education and apprenticeship, to his accomplishment of the great mission in his life, the building of the Sun Temple at Mundira on the shores of Kalinga Sagara. During the recounting of the main event, the book also tries to unravel the many mysteries and entrancing encounters that Bishnu comes upon from time to time. Bishnu lost his mother under mysterious circumstances when he was only two. The incident left a lasting pain in the sensitive boy’s mind, although he was too small to make total sense of the tragedy. His caring father, the expert temple architect of Kalinga, raises him with tender care and trains him as a master architect. While undergoing training at Ekamra City, Bishnu loses his father, but not before learning from him that he was not his real father. The child could find out the identity of the natural father if he wanted to. Still, Bishnu chooses to keep it as a mystery, like his mother’s death.

Bishnu passes the young adulthood and householder phases steeped in romantic and filial love until the time for his mission arrives, with the invitation to be the chief architect at Mundira. Before the fourteen year’s stint at Mundira, Bishnu undertakes a sea voyage to Sinhala and Brahma Dweep to meet and persuade early masters to join the project. Finally, the temple work is almost complete except for installing the presiding deity and the kalasha atop the vimana. These tasks prove too big for his expertise. In the end, through the unsolicited help of a stranger, the complex installations are executed, and the wonderful temple is ready for inauguration.

Bishnu’s ideals and interests in life far exceed his accomplishments as an expert temple architect. In all stages of his life, he plays his roles faultlessly. His strong willpower strengthens his values and goals in life. As a child, he holds back his curiosity to find his real father even though offered the key to the mystery. As a young man, his mystical rendezvous with an angelic beauty, Sura, is sealed by him in the secret chamber of his heart at her behest.

Although outwardly rational, Bishnu is destined for many mysterious experiences in life, like her romance with the celestial nymph. As a child, his analytical mind hesitates to unquestioningly accept his father’s word that Lord Shiva visited Ekamra and built the holy Bindu Sagara. He writes, “I couldn’t believe things what I was hearing, and my first question was why the lord would leave his abode and come this far.” (p-26). But the discussion that ensues with his father leads him to conclude that the moral force of an individual derives from his being part of a cosmic whole and submitting to a universal destiny. Mysteries and inexplicable powers come up repeatedly. One such case is the episode of Bishnu’s journey to Brahma Dweep to meet a master builder of Kalinga before embarking on the Mundira work. This beautiful coral island is the abode for the best craftsmen of the world, and others are not allowed to spend even a night there.

Talking of mysteries and miracles, nothing will exceed the wizardry of the young visitor who provides the finishing touch to the construction. Of course, the laser and holography imaging technologies said to have been used by the youth inside the Kalasha appear anachronistic. This stranger’s identity is not revealed in the book nor the secret of Bishnu’s birth. Since ‘Lotus Land’ is the first book of the Konark Secret Duology, the reader may expect to read about these secrets in the next book.

The book is categorised as Mythology by the publisher. But it also fits into the category of Historical Fiction. This category gives the author a license to embellish the mainframe of history with narratives not necessarily established by historians. Aptly ‘Lotus Land’ abounds in such anecdotes that supplement the central theme of temple building. The flavour of Kalinga comes through in the detailed description of the culture, traditions, cuisine and the festivals of the land. Description of the maritime glory, the temple architecture, impeccable town planning and the military powers of Kalinga point to a land that exuded great power and exquisite beauty in all aspects of life. The flowing prose and the masterly storytelling skills of the young author make the integration of the main story and the cultural narratives a smooth one.