I Am On A Mission To Promote Mardal In Maharashtra, Says Odisha Artiste G Ramprasad 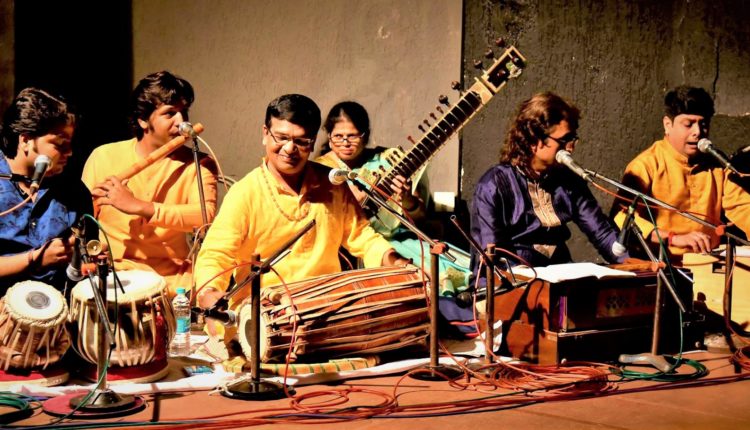 Surviving in the land of Bollywood as an independent Mardal player, Odisha’s indigenous percussion instrument, for 17 years is a feat in itself. Odisha’s G Ramprasad, a leading Mumbai-based Mardal player, shares his story with Odisha Bytes:

Why did you decide to be a Mardal player?

It happened accidentally. Like most of my friends from a middle-class background, getting into a government job was my sole mission during the college days.

After graduating in commerce from Bhubaneswar, I was trying my luck in various competitive examinations. Most of the time, I used to fall sick, apparently owing to the stress of studies. The doctor, who knew me since childhood,  advised me to pursue music as a hobby as a stress-reliever. That is how I got connected to music.

You could have chosen painting, dancing or some other hobby. Why music?

I belong to a South Indian Brahmin family. Both my parents are from Andhra Pradesh. They arrived in Bhubaneswar for work and settled down. So, I grew up in Bhubaneswar.

Usually, South Indian families encourage their children to learn classical music or dance. My mother is an avid lover of Indian classical music. She used to listen to all the classical concerts being aired on the radio those days. Her love for music also created an interest in me. She used to take me to all the bhajan and kirtan programmes happening in a nearby temple where the devotees, who are usually amateurs, used to sing and play instruments. I started playing tabla here for the first time without knowing anything. That was the beginning of my love for rhythms. 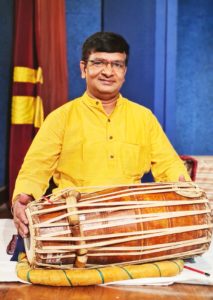 When did you decide to have a career in music?

A family friend of ours used to work at the Odissi Research Centre. So, he was connected with a large number of artistes. Somehow, he believed that I have got some talent in percussion playing and suggested that I apply at the Utkal Sangeet Mahavidyalaya (Odisha government’s college of performing arts in Bhubaneswar) to learn tabla. Though I was preparing for different jobs, I applied for the entrance test.

Since I knew nothing about tabla, except being interested in it, I was not accepted. However, Guru Banamali Moharana, who was head of the Mardal department then and was present in the interview board, convinced me to take up Mardal. “You are a South Indian. So, you must have a good sense of music. Join my department. I will take care of you,” he assured me. And that was the turning point in my life and career. He became my guru, guardian and mentor for the rest of his life.

How did Utkal Sangeet Mahavidyalaya help and shape your future as a Mardal artiste?

I spent eight long years as a student at the Mahavidyalaya from where I completed my post-graduation in Mardal. The college brought a complete transformation in me from an indecisive teenager to a committed artiste.

Besides my guru (Guru Banamali Moharana), Guru Dhaneswar Swain also guided me a lot. I had a questioning mind and was fond of reading as well. The college library, that has a fine collection of books, helped me to acquire theoretical knowledge that usually many performing arts students lack.

The college had a number of great artistes of Odisha as faculty members. So, I was fortunate to know them personally besides observing their creative work closely and constantly. Eminent actor Bijay Mohanty was our principal. He started the tradition of monthly concerts by different departments. We were the first batch of our department to present a group concert and got a standing ovation. The success of our show and my guru’s introduction helped me in getting connected to Odissi dancers and musicians of the city, including great masters like Guru Kelucharan Mohapatra and Guru Gangadhar Pradhan who accepted me to play Manjira (small cymbals that help to maintain rhythmic patterns in a dance concert).

Why did you shift to Mumbai?

Though Bhubaneswar offered me a lot of opportunities to accompany dancers and musicians apart from the continued tutelage under my guru, there was the question of earning a livelihood. At this juncture, my college-mate and flutist friend Aviram Nanda from Bhubaneswar, who was based in Mumbai then as a disciple of legendary Hariprasad Chaurasia, suggested that I shift to Mumbai as there was no Mardal player there.

It was a very painful decision to leave Bhubaneswar and my guru but there was no way out. In fact, my guru accepted the reality and advised me to shift to Mumbai.

How was your struggle to settle down in Mumbai as a Mardal player?

Fortunately for me, my friend Aviram offered his house for me to stay. Meanwhile, my guru spoke to all the eminent Odissi exponents of Mumbai about me. So, as soon as I arrived in Mumbai, I started getting invitations from Odissi institutions to play for them. Aviram’s timely suggestion and support and the great respect that my guru had in Odissi dance circles all over the world helped me to settle down as a Mardal player in Mumbai.

I have now been here for 17 years. Mumbai’s Odissi community has given me much love and support. I teach, perform and compose rhythms for choreography. I have performed all over India apart from touring a number of foreign countries. I also received the Taalmani Award from Mumbai’s famous Sur Singar Samsad. Whatever I have accomplished in my profession, Mumbai has given it all. 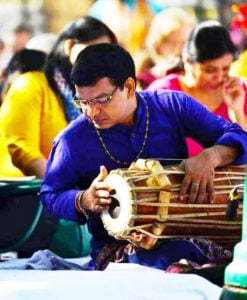 You are in your late 40s and still single. Are you averse to marriage?

Marriage happens in two ways – arranged or through love. I struggled for so many years to settle down as a Mardal artiste that I had little time to think of marriage. I love my profession so much that it is too late for me to fall in love with anything else.

I was not averse to an arranged marriage. But parents usually look for grooms who are settled in jobs. People praise and love artistes but they hesitate to accept them as prospective grooms. This is our social reality and I have accepted it without any bitterness or regret.  After all, I am wedded to Mardal, literally.

Do you miss Odisha? Do you have a plan to be back in your home state in the future?

I miss my parents who are in Bhubaneswar. But I have no plans to be back there. I am on a mission of Mardal’s promotion in the Maharashtra region that has been set by my late guru.

Mardal Player Silpika Maharana In Her Own Beat In The World…