Maa And Her Devotees Simply Love This Offering 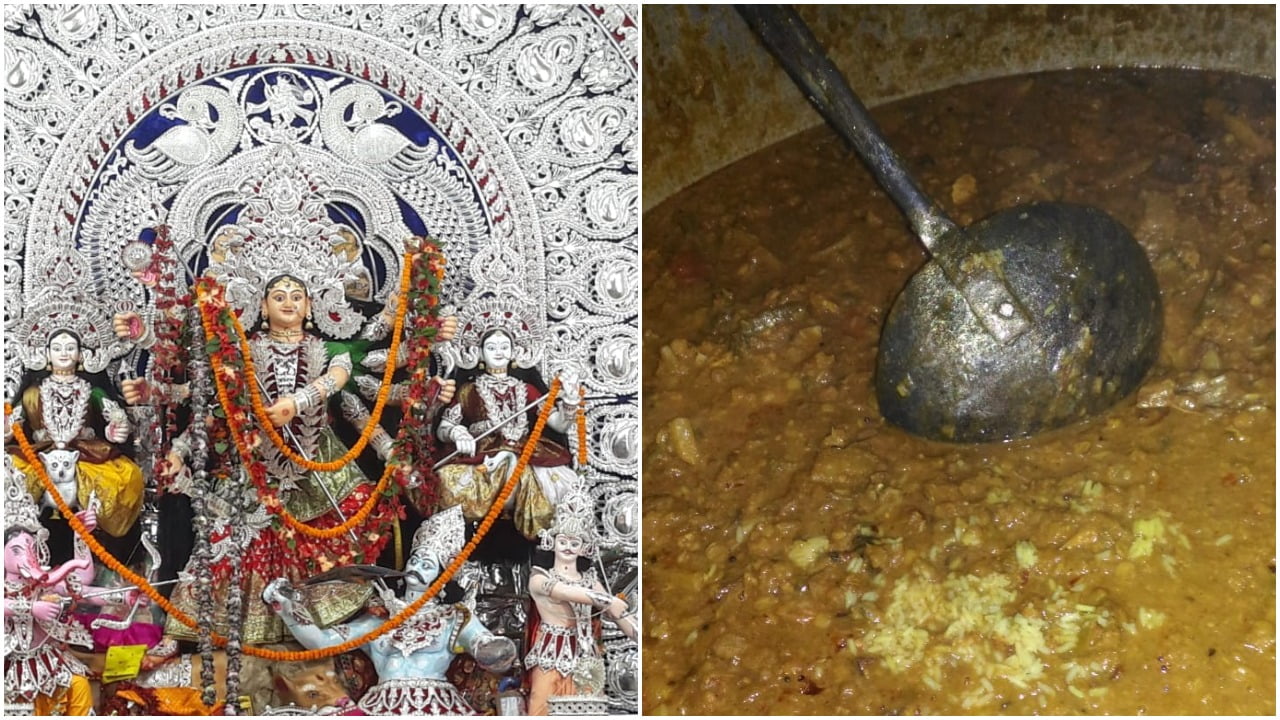 Cuttack: Can you imagine fish being served to thousands of people in a single day? Well, the incredible feat is achieved by the puja mandaps of Cuttack’s Chandini Chowk and Alisha Bazaar on Dussehra every year. ‘Maccha Bhog’ or fish offering is given to the goddess and then distributed among the devotees. It has been a tradition for the past many-many years. Actually, there is no historical evidence to suggest when it started. But it began as far back as the memory of the oldest inhabitant of Cuttack can recall.

While ‘Dahi Pakhal’ is served on ‘dashami’ (the tenth day), ‘machha bhog’ is offered on ‘navami’ (the ninth day).

Roughly, the recipe of the offering goes something like this: Fish fries mixed with vegetables, spiced up to add a distinct flavor that makes it the favourite of many. It comes with the sweet delicacy, ‘kanika’ as an accompaniment.

Throwing light on the tradition, septuagenarian Fakir Charan Singh, a life member of the Chandini Chowk Puja Committee, tries to give as accurate an account as possible. According to him, it all started in the thatched house of a Bengali-Dutta family in the 19th century, when they brought a clay image (mrinamayee murti) of Goddess Durga.

As for Alisha Bazar, old timers say the tradition probably started 50 years back or maybe more. “There is no conclusive proof,” says Badrinarayan Singh, secretary of the Alisha Bazar Puja Committee.

‘Rohi’ and ‘Bhakura’ are two fish varieties that go into making the bhog. They are not necessarily bought by the respective puja committees, many of them are donated. Keeping a target of 7,000 devotees, the Chandini Chowk Puja Committee uses six quintals of fish to prepare the dish, while the Alisha Bazar Puja Committee has a target of 4,000 devotees and accordingly, uses 3.5 quintals for it.

The offering is made to the Divine Mother on the navami-evening after ‘Chandi Path’ is over. When this phase is complete, it is distributed among the devotees.

There was a time when the fishermen of Naraj, about 14 km from Cuttack bus stand used to get the whole supply of fish for the Alisha Bazaar Puja Committee. The fishermen used to (they still do) take sindoor of the Devi on ‘ashtami’ (the eighth day) to do puja of their boats. Although now they cannot deliver as much quantity, they still get about 20 to 25 kg of fish every year along with a collective donation of Rs 1001. The rest of the supply comes from the Khapuria fish market, said Badirnarayan.

According to Badrinarayan, the tradition of Pani kakharu-bali (sacrifice of white gourd) on ‘ashtami’ and fish offering on navami has been the practice in ancient Chandi Mandira during Dussehra in the silver city and probably adopted by their forefathers in Alisha Bazar.

Ramesh Chandra Behera, the organizing secretary of the Chandini Chowk Puja Committee says that Pohala-fish-fry (of two to three kilograms), saga-fry (saga bhaja) and brinjal-fry (baigan bhaja) are offered to the deity along with fish-ghanta, kanika, khata and other items before it is distributed among about 1500 shop owners and 5000 households that contributed donations for the puja. Tokens are distributed for the purpose by volunteers.

Alisha Bazar Puja Committee introduced to parcel system for ‘maccha bhog’ last year for those who want to take it home.  Each parcel, meant for two people, is priced Rs 30.

Maccha ghanta is prepared by Brahmin cooks with the same sanctity as Dahi Pakhal. “Seven Brahmins take a bath, put on new ‘dhoti-chadar’ and mask their faces with pieces of red or white cloth before initiating the preparation of ‘machha bhog’ on the morning of ‘navami’. We remain so till the evening when ‘fish-ghanta’ is offered to the Divine Mother,” says Chaitanya Dash, the main cook of the Alisha Bazar Puja Committee.

Ajay Devgn’s ‘Maidaan’ To Release In…