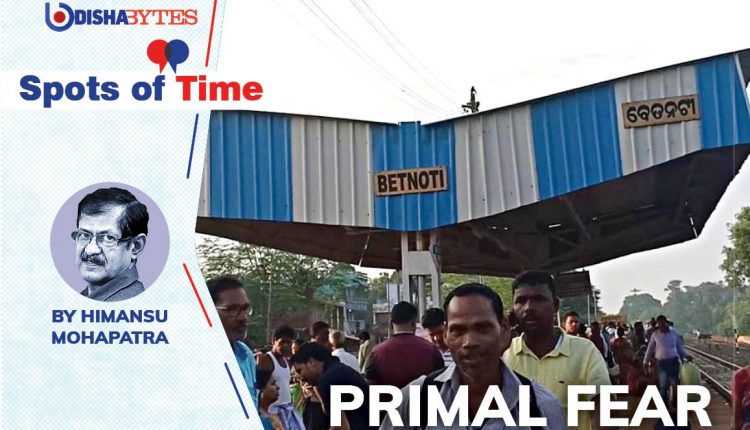 Like previous evenings, that evening too Subrat and his cousin repeated the ritual of one last chat under the electricity pole that stood a few feet into the mouth of the concrete road which sloped down towards river Sukjuda. After that Subrat would cross the road to go into his own house right opposite the pole and his cousin would go further down into his.

“There’s no one to see or care for you. Don’t forget no one has your back,” said his cousin just before they parted.

Subrat knew the words were in reference to the big shocker of Subrat’s second class in the intermediate science examination of 1975. The results had come out a week or so ago. His uncle had taken one swift look at the marksheet and before tossing it aside, remarked that his fate had been sealed. Meaning, no more engineering or medical for him. Arts remained the only educational route open, but to nowhere.

The condemnation that had come in the wake was big enough to drown the flood of eulogies which washed over him only two years ago when he passed the Matriculation examination in a high first division. He had been the toast of the two houses to which fate had linked him, his father’s by birth and his maternal uncle’s by upbringing. Now he found himself knocked out of the favoured spot in both houses.

But his cousin’s words were cause for concern. They were telling him that the examination matter was actually an existential matter. It was not so with his cousin. He was no model student. But he never had to worry about losing the protective cover of family at any time over as trivial a matter as an examination result.

So the warning words were giving Subrat an inkling about his condition, one that he had dimly perceived on the night of his first train journey from Betnoti to Beripada when he was around 6.

“Your mother was born on the day of the sacred Basanti Puja. She died young, at the age of 20, but it was the sacred day of Savitri Amabasya. She was not from this world.” His maternal grandma had never tired of telling him.

She had brought him up. She had given him everything, a mother’s love and care, and, more importantly, a mother’s milk. But she always told him – the noble soul she was – that she was standing in for his dead mother, and, that she fell short. Though she was his mother in a real sense – he called her Maa – she treated Subrat differently from the large brood of her other grandchildren, most of whom lived in Baripada. She made them give him a wide berth right from the start. Elder cousins used the polite ‘tume’ in addressing him rather than the dismissive ‘tu’, much to the grudging bewilderment of the cousins his age who found themselves fixed or dispatched with the ‘tu’ in their daily interactions with their elder brothers and sisters.

Subrat should have seen it as unnatural. But he didn’t. Being too drunk with the idea of his born privilege, he welcomed it. He was convinced – contrary to hard evidence that the two hand-to-mouth households amply furnished – that he was destiny’s child.

The train journey of that November night told him a different story.

The wedding at his grandma’s uncle’s house in Betnoti was over. His grandma and three aunts decided to stay back for an extra day, for rest and relaxation. The children had to head back to Baripada so that they could catch up on school. So a large contingent of brothers and sisters marched to the railway station in Betnoti that evening, Subrat in tow. It was going to be his first ride in a train. He was elated.

The distance between Betnoti and Baripada was 21 kilometres. There was only one train that did up and down daily on the single narrow gauge rail track between Rupsa and Bangiriposi. When the down train from Rupsa arrived at the station, they climbed aboard. The compartment they got into was almost empty. The party fanned out inside and occupied their seats of choice. Subrat found a window side seat and plumped himself down on it. The train emitted a piercing horn and chug chugged out of the station.

Within a few minutes of the train gathered speed, Subrat knew something was wrong. The cold wind of the winter night blew in menacingly through the shutter-less open windows of the train. Sitting by the window side, he got the full blast of the cold wind. His bare shirt was not enough of a protection.

He looked across at his elder cousins, hoping to draw their attention. They were sitting leaning against each other, brother against brother and sister against sister, all covered from top to toe in their chadars and shawls. The train rushed along. Despite the noise, an eerie silence prevailed in the compartment. He looked ahead and back and sideways again and yet again. No one stirred. He tried to squeeze himself into a ball in order to keep warm. It was like he was thrust into the midst of a group of apathetic strangers.

The train went on as if the journey had no ending. Casting his eyes once again on the huddled figures of his cousins, he knew that he was an outsider looking in on a scene of comfort from which he was excluded, perhaps for the rest of his life. On that night in the train he could dimly sense that to have two homes was to belong to neither one in a real sense.

Not being able to name it at the age of 6, he had thought that it was the train.  And the fear of the train had been ingrained in him ever since.

“If I ever write,” he thought, “my first story would be about this primal fear.”