[Watch] The Humane Ukrainians Under Attack From Russian Troops 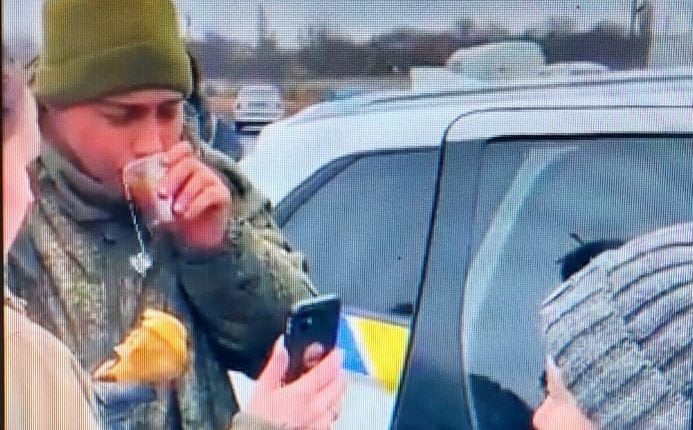 New Delhi: A noble act by the under-attack civilians of Ukraine towards their Russian enemy has won them praise on social media. Though living under miserable conditions for the last eight days, the Ukrainian men and women did not think twice before serving some hot tea and some bread to a Russian soldier, who they held captive.

A video of a Russian soldier being consoled by the Ukrainian people went viral after being shared by one Christopher Miller on Wednesday. The men behind the camera can  be heard saying “Don’t know why they are here.”

“These young men, it’s not their fault,” another Ukrainian said in the video.

The Russian soldier is seen sipping tea and munching on bread given to him by the people who caught him.

The video also shows a woman holding a phone to the Russian soldier and was reportedly video calling his mother in Russia to tell her son was fine.

Ukrainian Ministry of Defence said Russian mothers could come to Kyiv and collect their sons who had been taken prisoner.

Remarkable video circulating on Telegram. Ukrainians gave a captured Russian soldier food and tea and called his mother to tell her he’s ok. He breaks down in tears. Compare the compassion shown here to Putin’s brutality. pic.twitter.com/KtbHad8XLm

‘You Can Do Better’: Know Why Serena Williams Called Out The New York Times

Bhubaneswar Mayor Polls: Who Will Be BJD’s Right Choice?