Coconut, The Tree Of Life And Universally Loved Multipurpose Plant 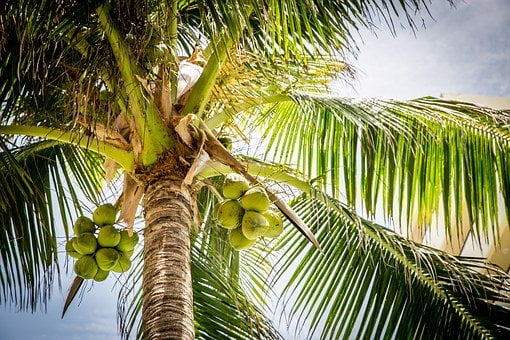 September 2 happened to be World Coconut Day. The aim was to encourage investments and promote the development of coconut industry in member countries of Asian and Pacific Coconut Committee (APCC), which functions under the aegis of United Nations Economic and Social Commission for Asia and the Pacific (UN-ESCAP).

Let’s take a look at this universally loved plant which is synonymous with ‘tree of life’.

The tree derives its name from the old Portuguese and Spanish word ‘coco’, meaning head or skull after the three indentations on the coconut shell that resemble facial features. Literary evidence from the Ramayana and Sri Lankan chronicles indicate that the coconut was present in Indian subcontinent before 1st century BCE.

Coconut palms require warm conditions and high humidity for proper growth, and are intolerant of cold weather. Given proper care and growing conditions, coconut palms produce their first fruit in six to ten years, taking 15 to 20 years to reach peak production. Kerala has the largest number of coconut trees in India. In terms of production per hectare, Tamil Nadu is No. 1.

Coconut fruit is an indispensable part of Hindu rituals and festivals in India. But what makes it such a popular fruit of the tropics is its nutritional qualities. Coconut water present in the tender coconut is highly beneficial for our gastrointestinal tract and is a major source of nutrients.

It contains some important vitamins such as Thiamine (B1), Riboflavin (B2), Niacin (B3), B6, Folate (B9), vitamin C, vitamin E and Vitamin K. Coconuts are especially high in manganese, which is essential for bone health and the metabolism of carbohydrates, proteins and cholesterol. Selenium is an important antioxidant that protects our cells. The fat present is known to promote better hair growth and reduce early greying.

Coconut milk and oil have great culinary uses and is a major staple in south Indian cooking. Coco butter is an essential constituent of soap and various other cosmetics. Coir, the fibre from the husk of the coconut, is used in ropes, mats, doormats, brushes and sacks, and as stuffing fibre for mattresses.

It is also used in horticulture, in potting compost mix. The husk and shells can be used for fuel and are a source of charcoal. The stiff midrib of the leaves is used for making broom in India. The leaves can be woven into baskets and used for roof-thatching as well.

It’s very clear why coconut is one of the most important plants, globally. It provides a good economic well-being to the farmers and the value addition of all its products is an added benefit.

COVID-19: Oxygen Checking Campaign To Be Launched In Odisha’s Ganjam

Prof L K Mahapatra: Why I Became A Teacher?