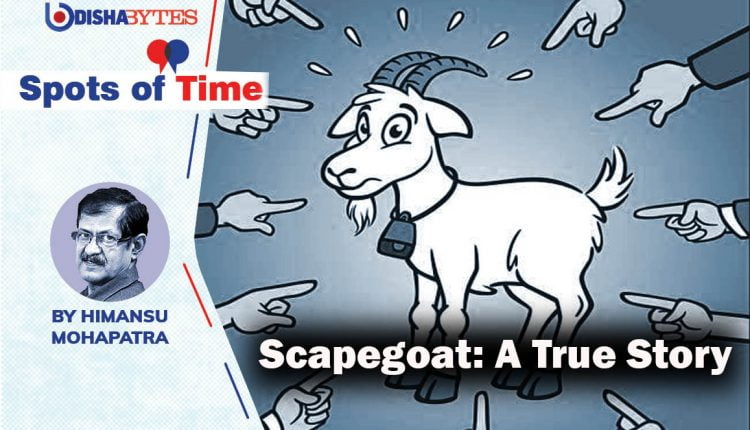 If I were able to travel back in time to fix one thing, I would choose that night in Baripada forty years ago. It was on this night that I willingly became a party to an act of vendetta against an innocent. Yet the craven blood lust had seemed perfectly natural and logical to my sixteen-year old mind after two weeks of mysterious raid on the ‘house on the hill’, so named because of its strategic location on the sloping road. If that and its nightmarish fallout seem like they never happened, it is because the film of familiarity has settled on it, much as water closes over the small pebbles thrown into a placid pool.

That late November afternoon in Baripada forty years ago was like the ones just gone by. The shadow of the evening was lengthening across the sprawling playground of M.K.C. High School. Only an hour or so remained for our daily game of cricket. I returned home from school only to get rid of my school bag and dash out at once.

The scene inside the house had me rooted to the spot. My agitated aunt was telling my uncle, freshly returned from court, the startling story of how a stone had come whizzing from nowhere and dashed the soothing cup from my grandpa’s lips as he sat on the inner veranda, sipping tea. My uncle was examining the broken remnants of the cup and the now inert missile.

Before he could utter a word, the brief lull was broken by a storm. Stones suddenly rained down on the house from everywhere, falling on the tiled roof and bouncing and ricocheting off the walls. No one was hit, but a shudder crept up the spine.

The drumming noise that was coming from the tin house next door, tenanted by new arrivals, a mother, her young son and a 8-year old daughter, indicated that we were not alone. We had a chance of confirming this when the pelting ended shortly before midnight.

The pattern was repeated the next day. The stoning resumed just after nightfall and ended before midnight. When it became clear after a week that it had taken on almost clockwork precision, a vigilante squad was formed to track down the culprit. Small groups of young adventurers, drafted from the town’s drifters, took up positions in the thickets and bushes in the overgrown backyard of the house. They saw everything except the hands that wielded the deadly missiles. Meanwhile, the continuous thudding against the tile and the drumming on the tin went on.

My grandma, away at Cuttack at the time, wrote home, pleading for propitiatory rites. “Someone has dispatched a bira against us. He seems a mild one, as no one has been hurt yet, but we have to placate him before he turns deadly”, she said. This was mumbo jumbo to my rationalist uncle. He was working on the theory of a hidden human factor and pressed on with his scheme of unmasking it. The town’s drifters had a field day, as a result. Almost all the cinema-side addas of the town temporarily shifted to our house.

Those two weeks of vigil seemed to me like a carnival. And no wonder. The nocturnal adventures, spiced with endless rounds of tea and biscuits, provided much fodder for gossip during school hours. Our house became the envy of all eyes. I wished for nothing better than the continuation of that dream-like state despite being on the doorstep of the high school final examination. The house buzzed with people and all kinds of wild schemes and strategies were being worked out and feverishly discussed. What more would a 16-year old want?

The turnaround came on the fifteenth day. The young son of our neighbour, only a few years my senior, reported an attack on their tin roof in the morning. Showing a good-sized stone, he said, “This landed on our roof a few minutes back. Maybe the attack has moved to a new phase, with this morning message.”

My uncle took the stone from him and, turning it over a few times in his palm, hurled it right back at the tin roof.

“Did we all hear the loud bang? Wouldn’t the bang be much louder if it were hurled from a greater distance?” My uncle said, as he looked at a few of the vigilantes who had stayed over.

The young man looked at him uncomprehendingly, but my uncle was smiling and he smiled in return before retreating inside.

It was after he was gone that the beans were spilled. A smart vigilante had flattened himself against the asbestos roof of their toilet the night before and had eavesdropped on conversations among mother, son and daughter. Apparently the son had said to his mother that they had successfully conned their smart lawyer neighbour into believing that someone else was behind the attack. They had reportedly had a hearty laugh about it. The disclosure had caused my uncle to change tack in the morning.

That evening’s agenda was prepared in hushed conversations and secret parleys involving adults only. I knew something big was about to happen and waited breathlessly for the evening.

At the end of half an hour’s merciless pummeling by lethal punches and kicks the young man had been left a wreck. He had confessed. He was brought to his house and made to repeat the confession before his dazed mother. Warning the mother and son of even more dire consequences in the days to come, the vigilantes marched away triumphantly.

The stone-throwing stopped the next day. It had ended as mysteriously as it had begun. My uncle’s diagnosis had proven correct. Everyone was satisfied and soon the daily goings on were resumed. A question did, however, lurk in the mind of a few who had seen the bad ending. Among them was an older cousin of mine. As a lover of detective fiction of James Hadley Chase, he had very much been in the thick of action, but as an investigator. He had, however, stopped short of being judge, jury and executioner, all rolled in. He had a heart which bled at what he had seen.

“Have you ever wanted to know why a mother and a son, who were new to the neighbourhood, would ever want to do such a thing?” he asked me in confidence a week after the unceremonious exit of the family from our area.

“Security in numbers. Stoning the house on the hill would attract a crowd. That would make them, new people in a new place, feel safe and secure.” I repeated verbatim my uncle’s explanation.

“But why on earth would they go to such length? Would they stone their own house just to keep up the pretence? This is such flawed reasoning”, he said.

A few more years would pass before I would discover the other piece of the jigsaw that didn’t fit: how on earth was it possible for the mother-son duo to pull off the kind of superhuman feat that this act of non-stop hurling of stones at two houses for two weeks clearly was? Was the black magic theory of my grandma correct then?

I do not know. I cannot say. All I do know is that our targets of that night, in so far as they failed the two acid tests of motivation and credibility, had been wrongly chosen.

We had made a scapegoat of the son. And there was going to be a reckoning.